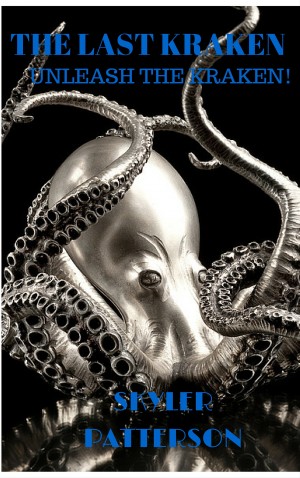 By Skyler Patterson
This is an Epic deep sea adventure. Its 1800s England. A giant leviathan Kraken is running amok! The hunt for the Last Kraken begins! More
Get ready to unleash the Kraken! This is an Epic deep sea adventure.. It is 1800s England. Ships are being destroyed by something or someone. Sailors say that it is a Kraken! Suddenly the king's merchant ships turn up destroyed. Captain Slaymore Seaborne is hired by the crown to end this monster! The hunt for the Last Kraken begins! This is the first book of a series. This tale was written by Skyler Patterson. He is the author of Revenge Of The Wolf..
Available ebook formats: epub mobi pdf rtf lrf pdb txt html
First 20% Sample: epub mobi (Kindle) lrf more Online Reader
pdb
Price: $2.99 USD
Buy Add to Library Give as a Gift
How gifting works
Create Widget
Tags: krakens productive kraken skylers kraken
About Skyler Patterson

Who is Skyler Patterson? Here is my impossible story. Yet it is indeed all truth. I am from New York City. My journey could be a book itself. I have worked in health care for forever. It was one day when taking the train to my job I grew tired of reading the newspaper. So I decided to read a book. I read books by J.R. Tolkien, Herman Mellvile, Bram Stoker,Ann Rice,and George RR Martin. I became addicted to reading all over again! It was when I had completed reading one series when I went to the clerk of a bookstore and asked when I could hope to read anything new from the author. The man stated That guy! HA! Good luck! Try 6 years! WHAT?! LIFE IS TOO SHORT! SO I began to ponder what if I YES ME could somehow come up with a tale of my own! And then the impossible happened I came up with an idea! That story would become The Book Of Swords. That idea took 5 minutes to conjure! That story gave me Writers Block. So I thought up another idea on the train platform. In 5 more minutes I thought up a tale which would become my greatest creation : T H E LAST KRAKEN! A tale of a giant leviathan squid running amok in the 1800s. I then began the task of writing it. I have had no formal training, and I had succeed in dropping out of college years ago DO NOT DO THIS! It did not go well! I will not lie I made every type of mistake that one could make in learning how to write an ebook. Yet somehow I completed this first book.Next I brought it to my extra smart school teacher sister. She gave me the most positive encouragement: LET'S HAVE A GOOD LAUGH! So I read her a chapter over dinner. The entire room fell to silence when I read it. Then stuttering and clapping ensued along with: H OW IN THE HELL!! And so I wrote many more books.It was in 2013 when I was writing my first Paranormal Romance book REVENGE OF THE WOLF , I knew I was on to something. I was with a woman I was dating. I passed her the laptop to read an emotional turning point of the story. My jaw dropped! I was in awe as tears began to spill down her face. And so I shall endeavor to WRITE MORE BOOKS!

Reviews of The Last Kraken by Skyler Patterson

You have subscribed to Smashwords Alerts new release notifications for Skyler Patterson.

You have been added to Skyler Patterson's favorite list.

You can also sign-up to receive email notifications whenever Skyler Patterson releases a new book.