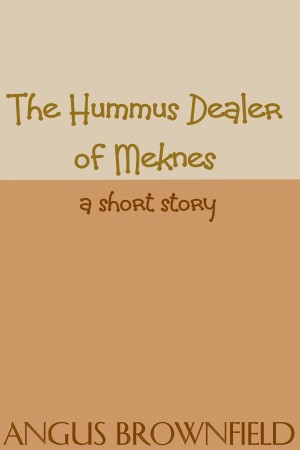 The Hummus Dealer of Meknes, a short story

By Angus Brownfield
Mustapha is a young man selling hummus in the medina of the city of Meknes. A rival opens her hummus stall opposite his and soon steals away most of his customers. Convinced she has a secret ingredient he can never discover, Mustapha intends to end his life. His rival saves him with a highly unconventional proposition. More
Mustapha is young and unmarried. He works diligently, preparing and selling hummus from a stall in the medina. One day Annisa, a newcomer to Meknes, offers him a proposition: marry her and she will share with him her secret recipe for outstanding hummus. She is nearly old enough to be his mother and he dreams of a young bride who will give him many sons. Naturally he declines. Soon Annisa, who opens a stall opposite his, has taken most of his customers, who are convinced she has a secret ingredient that makes her product superior to his. Mustapha cannot discover her secret and cannot continue to survive selling so little hummus. He is about to hang himself when he is rescued by Annisa, who is willing to give him her secret if he won’t end his life. The question is, is Mustapha wise enough to accept her gift?
Download: epub mobi (Kindle) pdf more Online Reader
rtf lrf pdb txt
Price: Free! USD
Add to Library
Create Widget
Tags: mystery antiquity conundrum youth versus age psychological slight of hand
About Angus Brownfield

You have subscribed to alerts for Angus Brownfield.