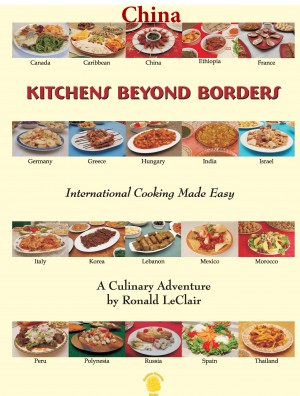 Ronald LeClair was born in a small town in northern New-Brunswick Canada. He moved around a lot all of his young life, spending time in Quebec City, Montreal and Ottawa. He won a 10 trip to `Man and His World` the 1967 Montreal World`s Fair when he was 14. This awakened a curiosity for world cultures. Later on, he lived in 5 different Canadian provinces and saw the country from coast to coast. He also traveled to the U.S., Mexico, the Caribbean, Central America, South America, Europe, the Middle-East, South Pacific and Australia. He studied 4 languages including French, English, Spanish and Russian.
He began to cook at a young age, coming from a family of cooks, helping at special dinners and occasions. Meeting people from all over the world, he learned cuisines of various cultures from them. He worked professionally as head cook in an isolated camp in the far north, where he cooked for 40 people serving 3 meals a day. All his life, he cooked as a hobby, preparing dinner parties, receptions, banquets and family meals. He is also a master carpenter by trade.

You have subscribed to alerts for Ronald LeClair.

You have been added to Ronald LeClair's favorite list.

You can also sign-up to receive email notifications whenever Ronald LeClair releases a new book.