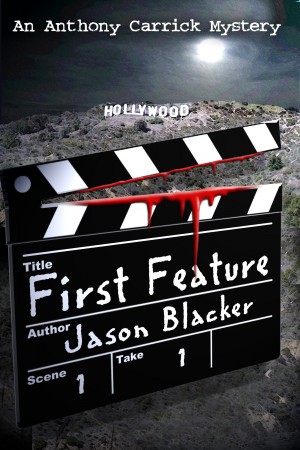 Like Sam Spade, Philip Marlowe and other hard boiled detectives before him, Anthony Carrick uses his guts, charm and humor to solve murders and deal with the other sordid details of people's lives.

Why was one of Hollywood's premier producers bludgeoned to death with his own Oscar? Amongst a dozen suspicious culprits, can Anthony solve this murder and keep Hollywood's seediness out of the tabloids before LAPD Homicide solves it for him.

Employed by one of the biggest movie production companies in Hollywood, Anthony is working against time. Tinsel Town's image must stay pure. But can he solve the murder before the tabloids publish the immoral truth of Hollywood's darker side? Find out in First Feature. The first of the Anthony Carrick mysteries.

I was born in Cape Town, South Africa but now call Canada home. I love the old hard boiled detective novels of Dashiel Hammett and Raymond Chandler, but they never wrote enough so I decided to write my own :)

With my literary fiction I'm trying to write stories that resonate with the human condition. But more than that, I hope to add something the written canon that helps to uplift the human potential.

I love the greats; Hemingway, Steinbeck, Fitzgerald and I love the poets too, especially Dylan Thomas and Walt Whitman. Other writers I enjoy include Chuck Palahniuk, J M Coetzee and K. Sello Duiker.

A healthy body creates a healthy mind that can write creatively. A lot of mine when not writing is spent running, working out or playing squash.

I live with 6 other sentient beings, 4 of whom are furry felines who seem to run the place. Not well, but they put up with us. I love to hear from my readers so please write to me!

Engrossing. The cover is misleading, and the publisher's blurb is a disservice to the book. There is no Hollywood hype except for the insanity of the lifestyle of the first victim and most of the suspects. Anthony is a careworn ex cop/paint artist working as a PI, who drinks too much, and smokes too much, and has a great snarky sense of humor. His best friend is his former partner from the Department, and they collaborate on the case while trading friendly barbs. The descriptions of the characters and the environments are excellent. The plot is interesting and twisty. The editing is subpar and there are some really jarring notes when there is an auto correct inaccuracy or a completely wrong word used. That kind of thing takes away from the flow in a book that is basically well written.

Anthony Carrick is a retired police detective, whose career didn't exactly end with fanfare and commendations, presumably due to a persistent difficulty in following the rules. He's a bit rough, real sarcastic, with a gruff charm. He comes by his attitude through his beat-you-up kind of life experience, and wears his rumples well. He nows works the odd private investigation gig to make ends meet, while he lives a bachelor's life with his one-eyed alley-cat, Pirate. He's intimately familiar with the seedy side of life, and thus sees most things with a jaded eye. In his world, endings are rarely happy, and nice, neat bows don't exist.

In First Feature, a movie producer gets killed with his own Oscar - what a great premise for a story, total Hollywood! There's an eclectic cast of characters in this whodunnit and the reader is treated to many difference slices of life on both sides of the Hollywood dream. Anthony gets caught up in the dark side of Hollywood - the consequences of excess, of losing one's morality, of betrayal and chasing the illusion. Fame, fortune, life, death. A day in the life of La-La land. Hollywood's golden glow is tarnished, leaving a trail of broken dreams in its wake. The story teems with grittiness, authenticity, and rich, colorful detail as Anthony digs deep to catch a murderer. Par for the course for a world based on false fronts, half-truths, and obsessive self-involvement and motivation, he needs to work hard to uncover what's really going on. Many of the players have their own secrets to protect, and he needs to figure out which ones point to murder.

Though Anthony Carrick rubs most people in the story the wrong way, he rubs the reader the right way - he's a believable, down on his luck soul, trying to make something out of the shambles of his life. He wants redemption, maybe even forgiveness for a lot of things in his life. He's still got his smarts, a knack for seeing beneath the surface, and his instincts are as sharp as ever. He navigates life with his own patchwork morality and is armed with a wry sense of humor. He's exactly who you'd want on your side, should you ever be so unfortunate as to need his services.

First Feature is a lively tale, that will keep you turning pages so fast, you'll want to read it in one sitting. Anthony Carrick is the next star of completely addictive detective stories. You'll love this guy, in no time at all he will charm you, and like me, you'll look very forward to spending many more hours with him and solving murder mysteries. Total fun. Pure entertainment. Very well-written. Prepare to be hooked!

-Rai Aren, co-author of the award-winning mystery novel Secret of the Sands

You have subscribed to alerts for Jason Blacker.

You have been added to Jason Blacker's favorite list.

You can also sign-up to receive email notifications whenever Jason Blacker releases a new book.