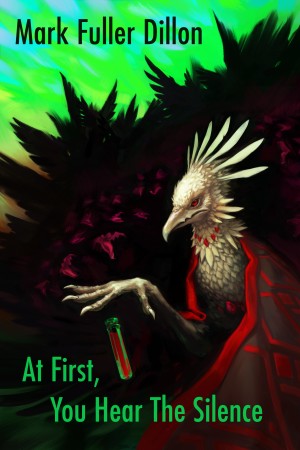 At First, You Hear The Silence

By Mark Fuller Dillon
Rated 4.40/5 based on 5 reviews
At thirteen, Philippe can see his father trapped in a world of secrets and silence, a world with no place for honesty or courage. But when the walls of that world fall apart, and something from outside breaks in, the silence becomes a warning shout... and Philippe will be tested in ways his father could never imagine. This is a dark modern fantasy, suitable for Young Adult to Adult readers. More
"An enthralling encounter with mysteries from beyond... tearing at the veil between worlds one minute, scratching at our very windows the next. Filled with breathless suspense and cosmic strangeness, it's a story sure to put the reader in the shoes of the sharply-drawn young protagonist, as his human strengths are put to the test."
-- Jeffrey Thomas, author of PUNKTOWN.

"A new twist on what used to be called science fantasy, it strikes a great balance between horror, sf, and action writing. This is a modern, intelligent story with its roots firmly in the Golden Age pulp tradition."
-- David Longhorn, editor of SUPERNATURAL TALES.

"Mark Fuller Dillon is an original talent, whose precise use of language, obliquely disturbing imagery and meticulous world building single him out as a writer to watch."
-- Peter Tennant, BLACK STATIC #35.

Most of my stories are set in the region where I live (Gatineau, Quebec), and are based on some of the stranger moments of my life, or on my nightmares (which have kept my nights lively and loud since I was three years old).

I've had work published in Barbara and Christopher Roden's ALL HALLOWS and in John Pelan's DARKSIDE; I've also had work accepted for anthologies and magazines that faded away before my stories could appear. The best of these are collected in my second ebook, IN A SEASON OF DEAD WEATHER.

Right now, my goal is to find reviewers. Writers can focus on craftsmanship, but they cannot be certain of just how much they've been able to learn and apply, until the readers tell them. To that end, I'm inviting you to let me know exactly what you think of my stories. Honest feedback, pro or con, is one of the most valuable things a writer can use.

And please don't hesitate to visit my blog, or my Facebook page.

Reviews of At First, You Hear The Silence by Mark Fuller Dillon

This book deals with a young man, who is trying to save his father. There are alien races, and different languages, but suprising it is very well done. I've often seen horror and sci-fi writers get too lost in creating their world that they forget that the reader wants to dive into the plot, and get to know the MC. This author was able to handle all of the above and pull it off fantastically! I enjoyed that as you go through the book, the author leaves hints and clues to help you read between the lines in this story and dig deeper into what is really going on. The feeling that the author creates as you read really lingers with you, making you want to pick up the book again! Putting this down to adult was not an easy thing for me!

Fantastic elements of horror, sci fi, fantasy and more. This author is very talented, and really engaged me as a read! Loved it!

Awesome read! This book was one I didn't know if I was going to like, but once I started reading it I was completely engaged! The author has such a unique voice and a great way of building the suspense, that I couldn't put it down! Dillion is a #NewToMe author, but definately one I will now be keeping an eye on!

Those familiar with the work of Mark Fuller Dillon are well aware of his strengths as a writer. He writes with clarity, carefully crafting scenes and characters though deliberate word selection and an impressive ability to translate his mind's vision into prose. These same strengths, so capably displayed in his previous collection, "In A Season of Dead Weather", can be found again in his most recent offering, "At First You Hear The Silence".

I read "At First You Hear The Silence" three times; first as a reader, second as a writer, and the third time as an admittedly envious writer. It would be very easy to refer to Mark as a craftsman because he applies so many tools of the writerly trade to his work. Having thrice read "At First You Hear The Silence" I'm more inclined to call him a clockmaker. At face value this story clearly and precisely tells us exactly what it's been designed to. Beneath that face, however, are the linguistic gears and cogs that make it tic.

"At First You Hear The Silence" is a gem that deserves to be read. Read carefully it reveals its influences, yet remains true to Mark's own style and vision. Read with a writer's eye it is impossible to deny the care and craftsmanship with which it's been written.

(reviewed 63 days after purchase)
Duane Pesice reviewed on March 12, 2016
(no rating)
Excellent. Superior command of the language and serious imagination propel this alien intelligence version of The Birds.
The intelligences involved are as vast and cool and unsympathetic as any Wellsian antagonists, and just as unapologetic about their action toward humanity.
The human characterization is spot-on. I can recognize parts of the protagonist in several people I know. You can make your own guess as to his father's secret. The clues are right there for you to read, in between the lines.
Subtle and engrossing.

Mark Fuller Dillon is a writer of exemplary short stories and novellas. I have previously enjoyed both his collection "In a Season of Dead Weather" and his novella "All Roads Lead to Winter". Both are supreme examples of story writing and are essential for anyone with an interest in strange stories, science fiction – or just good storytelling.
His latest publication is a novella called "At First, You Hear the Silence". Philippe is 13 and growing up in rural Canada. He is only just becoming aware of his own mortality and of the secrets lurking deep within his family's past. Philippe endures a difficult relationship with his father – until, one day, he has the opportunity to prove his worth: he is to be left to look after the farm, while the rest of his family go away on an overnight trip. His mother prepares Philippe for this test by making a list of his duties for the morning. Nothing could have prepared him, however, for what he must endure the following day. His world is shifted on its axis by a series of occurrences which test his resolve to the extreme. He is changed forever – but how has it affected his relationship with his father?
"At First, You Hear the Silence" is a fast-moving, compelling read which contains the best that horror, fantasy and science fiction have to offer. Mark Fuller Dillon's writing constantly evolves. His prose is both expertly crafted and precise, deftly creating an atmosphere of unease and, ultimately, dread. This is a great read. I would defy any lover of good fiction to not read this novella in one sitting.

An enjoyable read. The author takes you into the midst of a strange encounter that will undoubtedly scar the protagonist for life. A horror story permeated with an atmosphere of dread and mixed with action and mystery that will satisfy.

An interesting short story of survival horror with some cosmic twists. Reminds me a bit of an alien abduction narrative mixed with William Hope Hodgson's 'The House on the Borderland'. A young boy, Philipe is left for a night home alone to tend to the animals on his parents farm when a strange intervention occurs; it is otherworldly? Interdimensional? The truth may ultimately prove elusive, or illusive.

You have subscribed to Smashwords Alerts new release notifications for Mark Fuller Dillon.

You have been added to Mark Fuller Dillon's favorite list.

You can also sign-up to receive email notifications whenever Mark Fuller Dillon releases a new book.