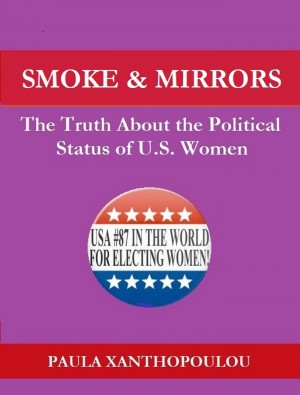 Smoke & Mirrors: The Truth About the Political Status of U.S. Women

By Paula Xanthopoulou
Rated 5.00/5 based on 1 reviews
Women hold an unacceptable 23.78% of seats in Congress, 244 years after independence from the British Empire: #83 (#93 counting ties) in the world for electing women. Why don’t our political parties establish voluntary quotas or rule changes, like so many other countries have done to accelerate the election of women? Have women become enablers of a national disgrace? Can we reach 30% by 2020? More
[This book can be used by women’s groups, candidates, political entities, educators, think tanks, and others for discussion and debate.]

A provocative exposition of the political status of women in the United States as relates to the lack of seats/power in Congress, where important legislation is passed that affects our lives every day. Includes corroborative vignettes from the author’s personal experience and action items aimed at change in our lifetimes.

244 years after independence from the United Kingdom, U.S. women hold a measly 23.78% of all Congressional seats - too far below the 30% benchmark set by the United Nations. Most shockingly, 12 states (24% of all states!) do not send even one woman to Washington.

The U.S. is currently 83rd in the world (#93 counting ties!) for electing women to national legislative bodies, and many countries of all sizes and political systems have gone ahead of us by using some kind of candidate quota system. Global results and studies clearly show that we are stuck if we continue business as usual. The numbers do not lie.

Many political leaders (men and women) and the Democratic Party have long given “lip service” to equal representation, but have taken pitifully few concrete/quantifiable steps to make it happen -- most often using a bogus party rule as a convenient excuse. Have women’s groups helped or hindered? Much more is required, and research shows that focusing on “open seats” is a way to accelerate the election of women to Congress.

It’s time to stop denying that everything is all right by adopting new strategies and holding our political leaders accountable. Time for women to stop allowing Choice (abortion rights) to be a deal breaker in terms of achieving “critical mass” in Congress and working together on many other issues important to women and their families. Time for affirmative action in U.S. electoral politics until women reach the 40-60% “parity zone.” Time for “Every OPEN SEAT a Woman’s Seat!”

We can achieve the U.N. benchmark of 30 percent women in political office by 2020, the 100th Anniversary of women finally getting the right to vote -- but that requires immediate action. Will we continue to deny the political reality or demand change?

First 33% Sample: epub mobi (Kindle) lrf more Online Reader
pdb
Price: $5.99
Free! USD
Buy with coupon Use the code AG100 at checkout to get this book for free during our site-wide promotion!
(Offer good through May 31, 2020 )
Have a better coupon?
Add to cart, then apply your coupon
Add to Library Give as a Gift
How gifting works
Create Widget
Tags: congress equality elect women parity open seats quotas affrmative action equal representation
About Paula Xanthopoulou 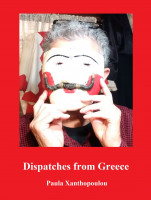 Review
Sandy Oestreich reviewed on May 17, 2012

This is an intriguing book, almost a monograph, that every Floridian political junky should devour. Well-written, well-documented in most places, it's a must. I enjoyed it. I learned what I needed.

You have subscribed to alerts for Paula Xanthopoulou.