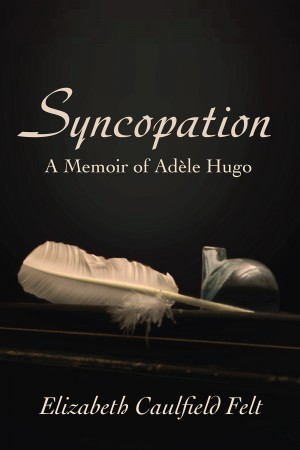 Syncopation: A Memoir of Adele Hugo

Elizabeth Caulfield Felt has worked as a cross-pollinator, book seller, cashier, librarian, typist, secretary, teacher, but always as a writer! She reads voraciously, nearly every genre, and writes in multiple genres.

Her first Smashwords novel is historical fiction for adults: Syncopation: a memoir of Adele Hugo is the fictionalized autobiography of Victor Hugo's scandalous daughter.

Her second Smashwords novel is Wilde Wagers, a light, romantic-comedy-historical-fiction mystery featuring Oscar Wilde and a zany group of characters.

Soon to be released novels include a series of steampunk fairy tales for middle grade and young adult readers.

Elizabeth has lived in seven different states and three different countries. She speaks one language extremely well, another moderately well, can get by in a third, and loves the music of unknown languages.

Reviews of Syncopation: A Memoir of Adele Hugo by Elizabeth Caulfield Felt

You have subscribed to alerts for Elizabeth Caulfield Felt.

You have been added to Elizabeth Caulfield Felt's favorite list.

You can also sign-up to receive email notifications whenever Elizabeth Caulfield Felt releases a new book.