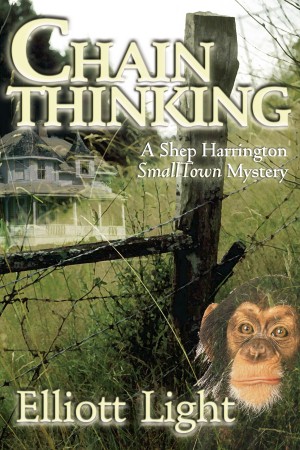 By Elliot Light
Syndey Vail enters lawyer-cum-detective Shep Harrington's life in a cloud of dust and vanishes just as quickly, leaving behind two very different but strangely connected things: a chimpanzee and a murder.

Elliott Light grew up outside Washington, D.C. in McLean, Virginia before the beltway encircled the capital city, before farms were turned into housing developments, and before open fields became mega-malls. The small town of Lyle is his literary creation and reflects a mixture of true life and fiction drawn from the place he grew up and the places his relatives and ancestors lived.

Light attended the University of Virginia, receiving degrees in Electrical Engineering and Law. After stints as an environmental and high tech lawyer, he's now practicing as a patent attorney. Light resides in Rockville, Maryland with his wife, Sonya, and their two felines, Sumo and Sasha.

Chain Thinking is his second published novel and the second in his Shep Harrington SmallTown™ Mystery series. His first, Lonesome Song, was released in 2002.

You have subscribed to alerts for Elliot Light.

You have been added to Elliot Light's favorite list.

You can also sign-up to receive email notifications whenever Elliot Light releases a new book.