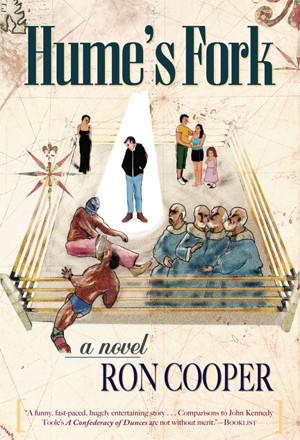 By Ron Cooper
A comic drama about philosophy, family, religion,
and, of course, professional wrestling.

Barely adequate philosophy professor Legare Hume has a mind-body problem. No matter how far he goes, no matter how hard he thinks, he can’t escape the world he lives in.

Ron Cooper was born in the South Carolina Low Country where he grew up traipsing through the swamp. He received a BA in philosophy from the College of Charleston, an MA from the University of South Carolina, and a Ph.D. from Rutgers University. He moved to Florida in 1988 and since 1995 has taught at Central Florida Community College in Ocala where he lives with his wife Sandra (also a CFCC faculty member) and their three children.

Ron is a past president of the Florida Philosophical Association, has published philosophical essays, and is the author of Heidegger and Whitehead: A Phenomenological Examination into the Intelligibility of Experience. His fiction has appeared in publications such as Yalobusha Review, Apostrophe, Timber Creek Review, and The Blotter. His novel, Hume's Fork, is available from Bancroft Press.

Ron is also a bluegrass enthusiast, and he challenges anyone to play and sing worse than he does.

You have subscribed to alerts for Ron Cooper.

You have been added to Ron Cooper's favorite list.

You can also sign-up to receive email notifications whenever Ron Cooper releases a new book.