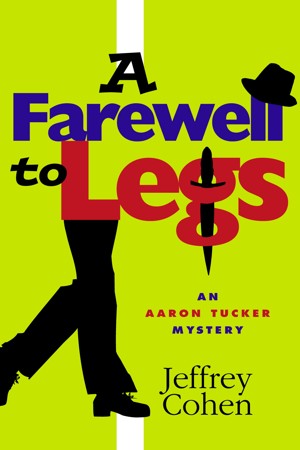 A Farewell to Legs

Jeffrey Cohen started life as poor street urchin, orphaned and taken in by a gang of pickpockets led by an older man named Fagin. No, wait. That's someone else, entirely.

In reality, Cohen was born in Newark, NJ during a certain year, and grew (more or less) up in Irvington, NJ, otherwise known as the Garden Spot of the Western Hemisphere.

After a childhood of normal duration, Cohen attended Rutgers College in New Brunswick, New Jersey, so as to maintain a record of never having left the Garden State for more than two weeks at a time, something which has never been equaled (or attempted) by anyone else. He studied English (when actually attending classes and not lounging at the student newspaper office), but decided to work as a journalist anyway.

Finding work of a sort at the Passaic Herald-News, he served as a municipal reporter for well over six months, establishing new lows in news gathering, but managing, in his final work for the newspaper, to quote Chico Marx.

Following a hideous foray into public relations, Cohen eventually became a trade journalist, covering the consumer electronics business until someone told him to stop.

Since 1985, he has been a freelance reporter and writer, writing for such publications as The New York Times, TV Guide, USA Weekend, Premiere, American Baby and The Newark Star-Ledger, among many others.

He is also the author of more than 20 feature-length screenplays, some of which are actually good. His work has been developed by Jim Henson Productions, CBS, Gross-Weston Productions, Ken Walz Productions and others.

Cohen lives in New Jersey (big surprise!) with his wife and two children, who have been sworn to secrecy.

For Whom the Minivan Rolls: An Aaron Tucker Mystery was his first novel, but defying both logic and public opinion, he wrote A Farewell to Legs: An Aaron Tucker Mystery anyway. And despite that book's rampant sales success, he went on to write As Dog Is My Witness: Another Aaron Tucker Mystery. He is also the author of The Asperger Parent: How to Raise A Child With Asperger Syndrome and Maintain Your Sense of Humor and Guns A' Blazing: How Parents of Children on the Autism Spectrum and Schools Can Work Together—Without A Shot Being Fired, two books that vie for the Guinness Book of World Records spot for "Longest Subtitle." He's also written a grocery list that has attracted a good deal of attention in Hollywood, and is being developed as a miniseries.

With Some Like it Hot-Buttered, Jeff launched the Double Feature Mystery series, in paperback from Berkley Prime Crime. And the fun continues with It Happened One Knife! Look for A Night at the Operation, in stores now!

Reviews of A Farewell to Legs by Jeffrey Cohen

You have subscribed to alerts for Jeffrey Cohen.

You have been added to Jeffrey Cohen's favorite list.

You can also sign-up to receive email notifications whenever Jeffrey Cohen releases a new book.