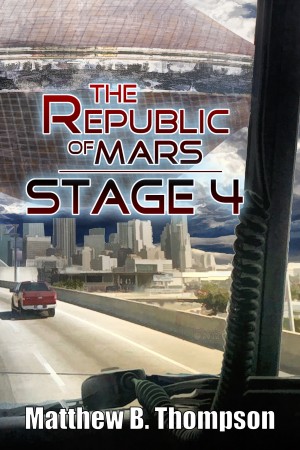 By Matthew B. Thompson
Rated 5.00/5 based on 1 reviews
Book 2 - It’s 2026. The human dream of turning Mars into another Earth has gone sour. Mars becomes an overcrowded prison, and friction turns into rebellion, which turns into murder. Earth has it even worse. An alien invasion fleet massacres our people and levels our cities. More
Less than a week ago, an enormous UFO emerged off the coast of California and paraded across the entire American continent. It came to rest in Washington, D.C., and its leader landed on the White House lawn. The UFO wasn’t full of aliens. It was full of humans from the fabled city of Atlantis, and their leader revealed a monumental revelation: humans aren’t as dumb as we were led to believe. They are the most intelligent beings in the galaxy. Some people accepted this, while others didn’t. An Atlantean rival also arrived, the Osirians. Their leader used this minor quarrel to physically divide the American people: half of them transforming Mars into another Earth, and the other half picking a fight with very dangerous aliens. Both were a trick.

Now have to reap what we've down.

Matthew B. Thompson is a native Texan and an avid fan of science, science-fiction and history. He has a background in physics and biology with a very good understanding of engineering and evolutionary genetics. He earned the rank of Eagle Scout at a young age, but was stricken with a very serious tumor shortly after earning a Bachelor of Science degree.

He beat the odds, even though he had less than a 1% chance of survival. To shock his doctors even further ... he started walking again. To EVERYONE'S amazement ... he got married. He is now the stay-at-home father for their small child.

“The Republic of Mars: Stage 4” is the second book in author Matthew B. Thompson’s series, and to say that it is an epic sci-fi novel is almost falling short.

It starts off in a big way with an UFO emerging off the coast of California and then travelling across the land to finally reach Washington D.C. Once its leader lands in front of the White House, we discover that it is not a race of aliens that have come to invade or visit us, but rather humans from the legendary city of Atlantis. Soon, we also discover that, contrary to general belief, there are no intellectually superior alien races in the universe, as humans are the most intelligent. This revelation, together with the arrival of Atlantean rivals, divides the humans, and where some choose to create a second Earth on Mars, others go up against dangerous aliens, building up to an explosive conclusion.

As many of the classic sci-fi authors have stated, one of the objectives in the genre is to convey current affairs in futuristic or alternate settings as a means to delve deeper into the issues that plague us and to create a consciousness about them. There are many such instances across this novel.

As to the story, I found it particularly interesting, not only because it is based on solid sci-fi foundations, but also because it is original at the same time, introducing common humans to Atlantean humans and the consequences that this cultural and intellectual interaction brings about.

This is definitely a book that drives you forward to read it till the end, and one that remains with you long after reading it.

You have subscribed to alerts for Matthew B. Thompson.

You have been added to Matthew B. Thompson's favorite list.

You can also sign-up to receive email notifications whenever Matthew B. Thompson releases a new book.