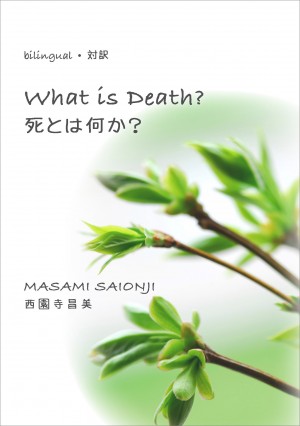 By Masami Saionji
From Masami Saionji's book "Vision for 21st Century," "What is Death?" offers a unique view of death as an act of returning, a natural part of our life-plan. In English-Japanese bilingual format.
私たちの人生計画の自然な部分（返すの行為）として死のユニークな視点を提供しています。英日対訳。 More
While we live in this world, most of us think about death with feelings of uneasiness. This is because our consciousness has become strongly attached to our physical existence, and we identify ourselves as physical beings. We also fear death as something that we will have to go through all alone, separating us from our families and loved ones. In truth, however, death is not something to be feared. Death is not the end of life, nor is it a final separation. Rather, it is the action of ‘returning.’ At the moment of death, we give back to the earth all the material elements which composed our physical body. Those material elements will be absorbed into the earth and our life will go back to its source, the source of the universe. In other words, we return to our original state as a ray of light and living energy. This act of returning is not something that our essential self fears. Rather, it is welcomed with joyful anticipation, as an event filled with sheer bliss.
— Masami Saionji