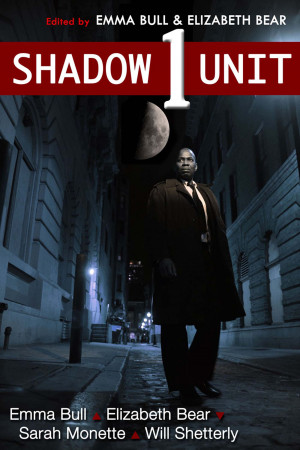 The BAU sends those cases down the hall. There, Stephen Reyes and his team pursue criminals transformed by a mysterious force: the anomaly.

About the Series: Shadow Unit

"Shadow Unit is the best TV show never filmed. If it had been filmed, it would’ve been pitched as “Criminal Minds meets The X-Files.” The Anomalous Crimes Task Force investigates the aftermath when the little-understood “anomaly” turns ordinary humans into (magically? psychically?) empowered monsters. Some members of the ACTF—the WTF if you’re feeling affectionate—are at risk of becoming monsters themselves." —Ruthanna Emrys, Tor.Com

As advertised, this book reads like episodes of a TV series. Fast and compelling reading. Lots of eating and joking around among the characters. Episode plots are a little weird and wacky. With more than a dozen books in the series, it could be the start of a habit. May lead to consumption of junk food.

Love this book! I was sooo happy to find out there are more in the series! Right up my alley.

I very rarely write reviews of products or books. With that in mind, let me just say that Ms. Bull has written a thoroughly enjoyable series of books. I've just finished book 1, and will now get the rest. Great cast of characters with excellent development. I can "smell" the roots of these works; "Criminal Minds", "X-Files", "NCIS", "CSI" ( the original if you please ) and these have successfully been welded into an airtight story line.
Keep 'em coming Emma. And if you , reader , have not found these books - you're just not looking hard enough.

Emma Bull and Elizabeth Bear have begun a great new series. I will read the rest of the books but knowing the skill of these two, I have no doubt that the quality will continue a the same high level as this book.

Cool stuff! I came here for Elizabeth Bear, but it is great that all the other writer's stories work just as well. It is bloody addictive though - I hope that my binge reading now doesn't destroy it for me!

I agree with what almost everyone says about the series: the writing and characters are excellent (and addictive!). Content-wise, I am frequently reminded of a cross between X-Files & Criminal Minds.

The great thing about all the Shadow Unit books is the characters. There are 9 main characters, and these are all real, fully-realized people. All the writers for the show-- Bull, Bear, Shetterly Bobet,Downum, Polk-- are published professionals. This really IS "the best TV show you've never seen." IF you buy volume one, you WILL want to go on reading. As I write, there are 10 volumes, with an 11th promised Real Soon Now.

An amazing book. While the description tells you what the book is built around, it's who you're reading about that really makes this wonderful. A whole host of well-developed, distinct and compelling characters, dealing with fascinating issues.

You have subscribed to Smashwords Alerts new release notifications for Emma Bull.