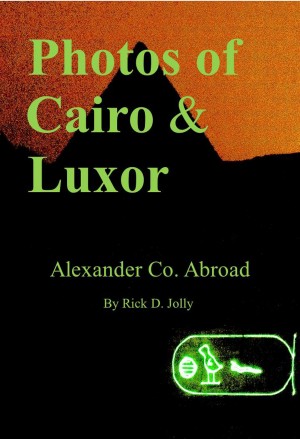 Rick D.Jolly is from Taylorsville, North Carolina, the eldest of three sons raised in a blue collar family. Married to Samantha, they lived in Hickory, North Carolina before moving to the United Arab Emirates located in the Middle East. He opened several social media accounts as a way to relate his experiences to family and friends, posting videos and pictures with firsthand accounts of trips in the UAE and Europe. After several years of living abroad he used previous online posts to help write a series of books called "Alexander County Abroad" with various subtitles to describe each location. The title comes from the county he was born, Alexander, a small rural county in western N.C. primarily a farming region. A place where most residents rarely venture pass state lines and never travel out of the country or "lord have mercy" a Muslim Country.

About the Series: Alexander County Abroad

Alexander Co. Abroad is a three part series with a set of companion books filled with firsthand photos to help illustrate Rick and Samantha's adventures living and traveling abroad. The American couple moved to the United Arab Emirates for a better way of life and a chance to see the world.

You have subscribed to alerts for Rick D. Jolly.

You have been added to Rick D. Jolly's favorite list.

You can also sign-up to receive email notifications whenever Rick D. Jolly releases a new book.