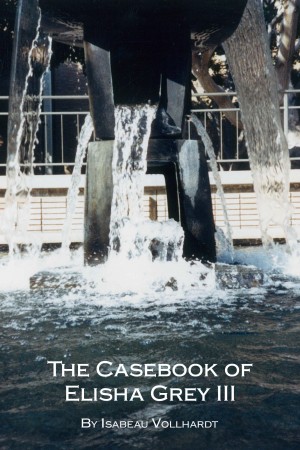 The Casebook of Elisha Grey III

The Casebook of Elisha Grey III chronicles the work of Elisha Grey, scholar and consulting detective in Atlantis, as recorded by his flatmate and student at the Temple of Atlantis, Kiara Ptolmai. The three novelettes are:"The Missing Daughter"; "The Jewel Theft on Riot Night"; and "The Return of the Weatherchanger". Drawing on the seminal "Casebook" & Casebook II, it can be read independently. More
Elisha Grey, scholar in numerous subjects & consulting detective in Atlantis during its Second Era, together with his flatmate Kiara Ptolmai -- daughter of Menos Ptolmai, Atlantean Ambassador to Chungkuo, investigate three crimes. In "The Missing Daughter" the capitol's constabulary recruits them to help find a young woman who has gone in search of her natural parents, one of whom may be arch criminal Samax Rex Pahadron. The story reveals not only the foster child system of Atlantis, but the increase of crimes against women as a result of what Grey calls "the commoditization of the human being." "The Jewel Theft on Riot Night" leads the two sleuths through the aftermath of civil unrest to investigate a crime that introduces them to a legendary yet never seen jewel thief, Coral Fox. In "The Return of the Weatherchanger", enigmatic artist Kamay Pellay has returned to Atlantis; when his room is burglarized he becomes central to understanding drug smuggling between Atlantis and Chungkuo. He also reveals the reason for his disappearance: travel to study shamanism in the distant region of Baikal.
Available ebook formats: epub mobi pdf lrf pdb txt html
First 8% Sample: epub mobi (Kindle) lrf more Online Reader
pdb
Price: $2.99 USD
Buy Add to Library Give as a Gift
How gifting works
Create Widget
Tags: fantasy science fiction atlantis detective fiction novelettes
About Isabeau Vollhardt

Isabeau Vollhardt received her Bachelor of Arts in Philosophy and English Composition from the University of Washington, Seattle, Washington, in 1980, where she studied Novel Writing with Charles Johnson, and the Philosophy of Science Fiction with Michelle Beer. She was exposed to the poetry of Rainer Maria Rilke in a class on Existentialism presented by Eva Hagemeyer. A longtime reader of Victorian era authors such as Arthur Conan Doyle, she was writing The Casebook of Elisha Grey in part as an homage to Doyle and in part as a result of her readings of esoteric works on Atlantis, when she began studies at Samra University of Oriental Medicine in 1991. Graduating with a Masters of Science in Oriental Medicine and receiving licensure to practice acupuncture and Chinese Medicine, she then went on to receive training in Reiki, reaching level IV (Seichem) Reiki training. Energy work and intuitive work in a variety of realms have been part of her personal and professional life since 1985 and encompasses study of Kuang Ping style taijiquan, shuilong qi gong, feng shui, clairvoyancy, Western Astrology, Native American journeywork, and Iai-Batto-Ho. Her experiences resulting from her shui long qi gong practice resulted in a volume of poetry which is now published: Songs of the Water Dragon / Poems for Plants & Planets / and Others. She lives in Ashland, Oregon, where she has practiced Chinese Medicine and taught tai chi, qi gong, and Chinese Medicine theory since 1997. Her short story "Farewell at a Graveside" was published by Innisfree Magazine in 1990. She continues writing with her focus on speculative fiction, and an occasional poem, because 'poems happen'.

About the Series: The Casebook of Elisha Grey

The Casebook of Elisha Grey chronicles the work of Elisha Grey, scholar and consulting detective in Atlantis, as recorded by his flatmate and student at the Temple of Atlantis, Kiara Ptolmai.

Elisha Grey, a polymath who studies and reads lectures on many subjects at The Temple of Learning, uses logic yet is open to using intuition. His flatmate Kiara Ptolmai is a hands-on healer from an oral tradition of the Caucasus and raised in Chungkuo, where the understanding of the role of the ethereal soul – the part of ourselves that contains all memory across time – contributes to deep perception and intuition, while her jurisprudence studies hone her ability to apply logic to her feelings.

Coming at logic and intuition from different directions, yet both of them applying the two together, Elisha Grey and Kiara Ptolmai are astute observers and solvers of the criminal activities of their day.

Also in Series: The Casebook of Elisha Grey 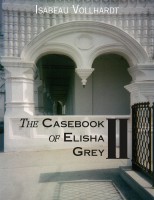 Reviews of The Casebook of Elisha Grey III by Isabeau Vollhardt

You have subscribed to alerts for Isabeau Vollhardt.

You have been added to Isabeau Vollhardt's favorite list.

You can also sign-up to receive email notifications whenever Isabeau Vollhardt releases a new book.