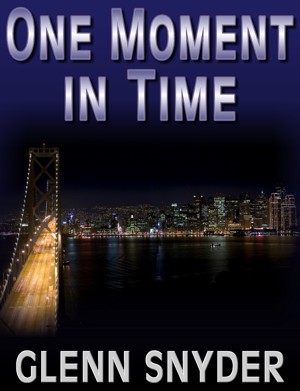 One Moment in Time

Glenn Snyder grew up in Marin County, a few miles north of the Golden Gate Bridge and San Francisco. After graduating with an International Economics degree from UCLA, Glenn worked as a finance professional at two large financial institutions. In 2001, Glenn earned his MBA from the University of San Francisco with a double emphasis in International Business and Finance. Shortly after his MBA, Glenn pursued two of his dreams, teaching and writing, while still working full time. For five years, Glenn taught International Trade and Finance and Managerial Finance at San Francisco State University, while he also wrote the first draft of One Moment in Time. In May of 2011, Glenn published his first novel, One Moment in Time. Glenn is currently a Finance Director at a large financial services company and is working on his second novel.

One Moment in Time takes us to interesting places with well developed characters. The description of foreign locations is authentic and we never expect the surprise ending.

It's a fast reading book, written with great imagination.

One Moment in Time is a quick and uplifting story that will make you laugh and cry. Glenn Snyder's portrayal of how one person can impact the world provides inspiration for today's times.

A highly recommended read for all!

Glenn Snyder's debut novel has a strong voice and message. The initial scenes pull you right in wondering where you are off to next. There are amazingly good observations and the key characters that are well developed. A heartfelt tale that makes one ponder their own - What's next?

You have subscribed to alerts for Glenn Snyder.

You have been added to Glenn Snyder's favorite list.

You can also sign-up to receive email notifications whenever Glenn Snyder releases a new book.