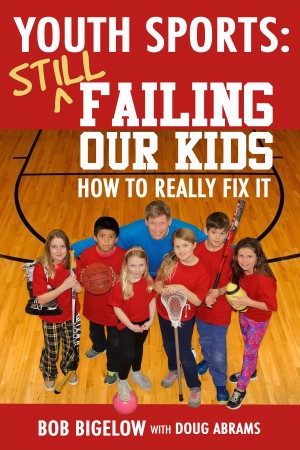 Youth Sports: Still Failing Our Kids - How to Really Fix It

NOW, in his second book, Youth Sports: Still Failing Our Kids – How to Really Fix It, Bob goes many steps further in demonstrating how improved structures for play can actually increase the development of children’s skills. Bob has conducted first-of-their-kind quantitative studies that show how a better model for youth programs boosts how much kids learn as well as solves the problems in today’s youth sports environment. While other approaches in many previous books haven’t yet created true change, Bob offers a genuine blueprint for success. He also cites real world examples where new play models have already improved youth sports while offering terrific fun and enjoyment! If you really want to change kids’ sports, you must read this new book!

Former NBA player, Bob Bigelow, speaks nationally and worldwide about youth sports programs, and provides new approaches for positive change to fully meet the needs of young athletes as the top priority. Bob was a first-round draft choice and played four years in the NBA; and in college for University of Pennsylvania Hall of Fame Coach, Chuck Daly. He has devoted several thousand hours researching and lecturing about organized youth sports and its effects on children and adults. Bob has appeared on major TV shows including CNN, on local radio broadcasts, and has been quoted in major publications including Sports Illustrated and The New York Times. He has been featured in numerous local newspaper columns and articles. He has been a featured speaker at many regional, national and international meetings and conferences of organizations and associations concerned with improving youth sports. For 25 years, Bob has conducted over 2,500 talks and clinics worldwide.

You have subscribed to alerts for Bob Bigelow.

You have been added to Bob Bigelow's favorite list.

You can also sign-up to receive email notifications whenever Bob Bigelow releases a new book.