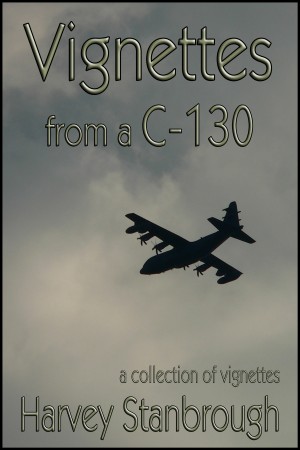 Harvey Stanbrough was born in New Mexico, seasoned in Texas and baked in Arizona. For a time, he wrote under five personas and several pseudonyms, but he takes a pill for that now and writes only under his own name. Mostly.

Harvey is an award-winning writer who follows Heinlein’s Rules avidly. He has written and published over 60 novels, 8 novellas, and over 200 short stories. He has also written 16 nonfiction books on writing, and he’s compiled and published 31 collections of short fiction and 5 critically acclaimed poetry collections.

To see his other works, please visit HarveyStanbrough.com.

For his best advice on writing, see his Daily Journal at HEStanbrough.com.

Reviews of Vignettes from a C-130 by Harvey Stanbrough

Forgot to rate this book. If you've every been in the military-or not-this gives a clear picture. Well worth a read.
Sam Turner

(reviewed 32 days after purchase)
Sam Turner reviewed on Dec. 16, 2011
(no rating)
VIGNETTES from a C-130:
Harvey:
I was 14 years old when Marine Gunnery Master Sergeant D. Alexander stayed with my family for three months. He had retired after 35 years. (He was a cousin of my mother’s. They grew up together in Shepherd, Texas.) He made all the landings in the Pacific until he was wounded on Eniwetok with a bullet through a muscle in his leg. By way of ongoing physical therapy, he had me hike with him on the Bright Angel Trail across the Grand Canyon. (I lived on the South Rim.) Being an only child, I looked up to him as an uncle.

I remember resting on a switch back and saying, “This is just like the Marines, isn’t it Drummond?”

A dark cloud came over his usually smiling face and he answered, “No, Sammy. This isn’t at all like the Marines.”

Even at fourteen I sensed that I had struck a serious chord with him.

Years later, long after he had moved on, I realized that he must have had what is now called PMT. He couldn’t sit still for more than five minutes. Even now, I can’t imagine what terror, what horror he must have felt with each landing of an island. There were moments when your vignettes touched me again as I thought of Drummond. They brought tears. Thank you for sharing.
Sam Turner

You have subscribed to Smashwords Alerts new release notifications for Harvey Stanbrough.

You have been added to Harvey Stanbrough's favorite list.

You can also sign-up to receive email notifications whenever Harvey Stanbrough releases a new book.