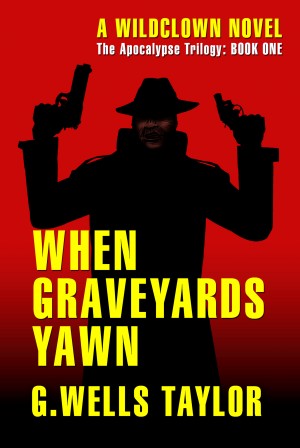 When Graveyards Yawn - The Apocalypse Trilogy: Book One

By G. Wells Taylor
Rated 5.00/5 based on 3 reviews
A dead lawyer enters the office of Wildclown Investigations and hires the detective to find his killer. Wildclown and his dead sidekick Elmo soon find themselves entangled in a battle for control of a secret that offers either hope or doom for humanity. The case takes us to a unique setting that mixes Gothic horror with the two-fisted pragmatism of a hard-boiled detective novel.
Download: epub mobi (Kindle) pdf more Online Reader
lrf pdb txt
Price: Free! USD
Add to Library
Create Widget
Tags: murder demon angel devil zombie ghost undead horror fiction detective fiction mystery fiction wildclown
About G. Wells Taylor

G. Wells Taylor is currently promoting his book Of The Kind, and working on a new Variant Effect novel.

Taylor was born in Oakville, Ontario, Canada in 1962, but spent most of his early life north of there in Owen Sound where he went on to study Design Arts at a local college. He later traveled to North Bay, Ontario to complete Canadore College’s Journalism program before receiving a degree in English from Nipissing University. Taylor worked as a freelance writer for small market newspapers and later wrote, designed and edited for several Canadian niche magazines.

He joined the digital publishing revolution early with an eBook version of his first novel When Graveyards Yawn that has been available online since 2000. Taylor published and edited the Wildclown Chronicle e-zine from 2001-2003 that showcased his novels, book trailer animations and illustrations, short story writing and book reviews alongside titles from other up-and-coming horror, fantasy and science fiction writers.

Still based in Canada, Taylor continues with his publishing plans that include additions to his Vampires of the Kind books, the Wildclown Mysteries, and sequels to the popular Variant Effect series.

About the Series: The Apocalypse Trilogy

In the World of Change people stopped aging, the dead rose from their graves, it started raining and it’s been raining ever since. But a guy still has to make a living doesn’t he?

Hard-boiled detectives, zombie gangsters, angels, demons, and gunslingers inhabit the dying cities and radioactive wastelands of an apocalyptic future where everyone must play a part in the battle at the end of the world.

Also in Series: The Apocalypse Trilogy

About the Series: The Wildclown Mysteries

MURDER IS STILL MURDER IN GREASETOWN. Even if life has become a little complicated. Fifty years ago, at the end of the last Millennium people expected something bad to happen, but they never expected the Change. People stopped aging, the dead rose from their graves, it started raining and it’s been raining ever since. Things looked so bad that everyone thought it was the end of the world, but a guy still has to make a living doesn’t he?

THE WILDCLOWN MYSTERIES in the World of Change. A unique setting that mixes gothic horror with the two-fisted pragmatism of a hard-boiled detective novel.

Also in Series: The Wildclown Mysteries

Reviews of When Graveyards Yawn - The Apocalypse Trilogy: Book One by G. Wells Taylor

This is very well thought out and written. This plausible universe developed fully in my mind's eye as I read the work, the story moves at a steady pace with out skipping important details or needless filler.

It was a long time since I read something that felt this fresh and different wihout feeling forced. An intriguing not-too-to-distant future holds no bars on life or death and the private investigator Tommy Wildclown works hard for his clients' fees and his own survival.

Well written with a very good flow and practically no typos, this holds a good commercial quality and I would be surprised if it will not be filmed.

How many times can you say that a story is so original that you have never read anything like it? The characters are so twisted and strange, yet the depth of characterization is so deep you find yourself completely convinced in their existence. The plot has so many layers you will probably resist the impulse to describe it to a friend because it would take so long to set it up and you wouldn't do it justice anyway. Just hand them your e-reader and let them enjoy it themselves. Dark, disturbing, political (the dead are a metaphor, I believe), hilarious, well-crafted and satisfying. Enough plot twists for several novels. It would make a great movie if anyone could pull it off---which I doubt. I thought I knew where the plot was going several times before I just gave up and enjoyed the ride. You will too. Get the book. You are welcome in advance. I bought Bent Steeple too and am looking forward to reading that one too.

You have subscribed to alerts for G. Wells Taylor.

You have been added to G. Wells Taylor's favorite list.

You can also sign-up to receive email notifications whenever G. Wells Taylor releases a new book.