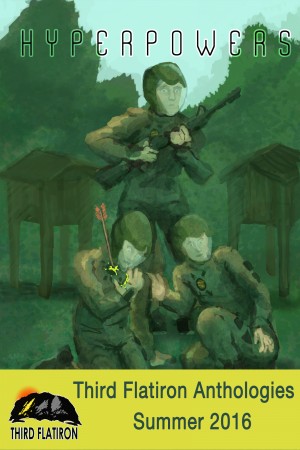 By Third Flatiron Publishing
Rated 4.00/5 based on 1 review
The "Hyperpowers" anthology from Third Flatiron Publishing and guest-edited by Bascomb
James, contains 16 short speculative fiction stories that explore
popular space opera and military fiction themes. More
Fictional military superpowers have captured our imaginations since
Plato invented Atlantis, and superpowers are all too real in today's
technological world. How would our stories evolve if they took place
on other worlds?

o Empires may grow and dominate, but civilizations can also lose
momentum and dissipate into lawlessness

o Great distances may put an end to warfare and environmental
degradation, but expansionist tendencies could cause it to spread
instead

o Our silicon-based creations or other life forms may compete with us
for galactic domination, ultimately outshining us

There are 16 stories in the anthology, all of which detail some adventure that has to do with space, alien invasion, interstellar battles and so forth. There’s kind of low diversity in the authors on this one, as you might expect given the topic, but the stories make up for it with fairly diverse characters. Also, we get to see some exotic aliens. There were several of the stories that I liked a lot.

One of these is “Grid Drop” by William Huggins. Celeste is part of a team that enforces the anti-tech provisions of a Fallowing, where an overpopulated and over-polluted world is stripped of technology so it can recover. She and her team are on a mission. They take the shuttle down to the offending village to deal with the problem. Will there be resistance? Can they save anyone here?

Another story that really caught my attention was “The Mytilenian Delay” by Neil James Hudson. This one is brilliant, sharply plotted, and very edge-of-the-seat. The captain of a warship has been ordered by her command to destroy the world New Borodin. Thinking the order is questionable, the captain sends the order by slow radio, which means there is a Mytilenian delay, and the order can be rescinded within 30 hours by faster-than-light communication. She expects a mutiny, but her crew holds fast. She discusses the order with her command, and realizes the Empire is in disarray, so large now that communication has broken down. Lodging her complaints about the order, she waits for it to be rescinded. Will the order be changed? Will there be a decision in time to save New Borodin? Read the story to find out.

These stories are all generally entertaining, including plot twists and subtle humor. Three stars.