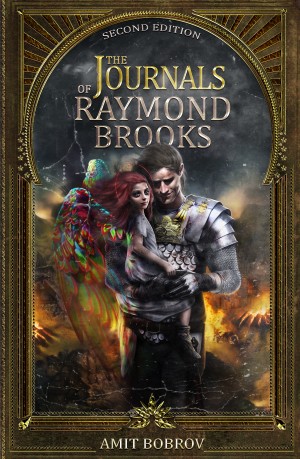 The Journals of Raymond Brooks

These are The Journals of Raymond Brooks, a mythical figure from the Dark Ages,uncovering the mysteries and adventures he experienced during his unimaginable lifespan. The Journals force humanity to face a terrible realization: there are monsters of horrifying power hidden from mortal eyes. They pretend to be sheep when they are wolves, pulling our strings and making us dance...until now.

Could the supernatural creatures really walk amongst us? And if they do, they must preserve their secrecy at all cost. Why then would Raymond commit virtual suicide by revealing their existence? What happens now, when all hell breaks loose?
Available ebook formats: epub mobi html
First 100% Sample: epub mobi (Kindle) Online Reader
You set the price! USD
Buy Add to Library Give as a Gift
How gifting works
Create Widget
Tags: fantasy dark fantasy free fantasy action adventure amit bobrov raymond brooks the journals
About Amit Bobrov

The Value of Nothing, by Amit Bobrov

I’ve come a long way since I first took the road not taken, having many great expectations.
Yes, these are unfunny literary puns. They tell the truth though, I’ve had a long and bumpy
road since I began writing and this is my story.

Somewhere during my school years I was diagnosed with Dyslexia, very high I.Q but severe
Dyslexia. I was told by those-who-know that there is little chance of me ever learning a
second language, let alone finish high-school under a normal curriculum and frame.

My parents were good to me and tried to be supportive as best they could, but deep down I
knew that I wouldn’t amount to anything on the academic field. Some concepts at school
were exceedingly easy for me, yet others were impossibly difficult. There was no middle
ground, no gray area. Either I completely mastered a field, or I completely failed. But I was
used to fighting, both physically with other kids and on a more spiritual level. All I’ve known
really is the struggle, and that has never changed.

I did finish high-school, and mastered a foreign language though, just barely, but I did. I also
did my three years in mandatory military service at the home-front command. The military,
like school had been a constant fight, from abuse during my first six months of service to
recovering from said abuse quietly.

Then came college in which I utterly failed. And it was then that my life shifted, not the
struggles, they were still there. I had a dream in which I’d be a writer, I’d create stories and
that’d be my one field in which I excel. Einstein said that if you judge a fish by its ability to
walk, he’d fail. So I though that perhaps this is my calling.

I did love telling stories. From an early age playing Lego, building castles and spaceships, to
later years in which I was a very successful Game Master, doing role-playing games like D&D
and World of Darkness. So writing became an extension of that, the one thing I’m good at.

The struggles were not over though, they were far from finished. I began writing, struggling
with every word. Remember Dyslexia? Well, I decided to write in English, not my native
tongue. So I fought for every word and every sentence, then obsessively re-wrote every
word and every sentence over and over again, like a deranged person. Everything had to be
perfect.

I even had a couple of Seers telling me that I was destined for greatness. That I would be
read and loved by many, and I believed it, I had to. Though no prophecy ever came to pass
for me, I was full of hope despite the many battles on the way, and in the end, a couple of
years after I began, the Manuscript was ready.

And it was awful!

I went to a dear friend of mine who was a C.O of a major publishing house here in Israel, in
addition to his role as a senior editor. He didn’t want to take me as a client, as to avoid
offending me. An editor’s job is not exactly pleasant to the ego, any author can tell you
that. I promised him that I’d take it bravely. Should I have told him I was accustomed to
failure already? For me failure is just a bump in the road. I fail and I try again, and again.
No big deal.

I know full well the value, yes value of failure. Failure can either destroy a prideful person,
or build a better and wiser soul. It all comes down to choice really. I chose to write,
and in so doing exposed myself to criticism and failure, but also to the possibility of success,
and that for me makes all the difference. Refrain from doing what I love because I might fail,
or because I may receive negative criticism and I have already failed by default. Try and
brave the odds, write, re-write, improve and improve again is the only way that I might at
some point succeed, or not.

So Itamar, my editor and friend read my Manuscript and told me quite clearly that I should
toss it in the ocean, and he was right. He said my idea was brilliant and the framework very
compelling, but my writing was dreadful to say the least. This was exactly the person I
wanted to work with. I wanted something to help me strive to be better, not someone to pet
my ego and watch me fail upon publication.

I learned from Itamar in a few lessons of Creative Writing what I never learned in four years
at the University, studying a Bachelor’s Degree in English Literature. For that I am eternally
grateful to Itamar, he was the devil I needed to tear me apart.

So I re-wrote the whole manuscript again, from the first word to the last. Then re-wrote it
yet again because I was displeased with my own results. Did I mention I was a terrible writer?
By the end of the 3rd Manuscript, I was not so terrible anymore. I sent it to be edited by a
Doctor in the field, because I wanted everything to be perfect.

Then began my quest to find a publisher. Having little knowledge on how to accomplish that I
failed, again and again. I fell into a scam and paid a false agent a not-so-substantial sum. I
sent hundreds of Query Letters, and invested countless hours. The few that bothered to
reply all gave negative answers. Only Christopher Little, former agent of J.K Rowling asked for
the whole manuscript and rejected me with a personal letter. I’m grateful to him for giving me
the chance.

Fast forward, I found an international publishing house here in Israel. I paid them under the
pretense that I was financing half the publishing costs and they were financing the other.
Of-course the book needed little editing as both Itamar and Dr. Michalson already edited the
manuscript, each and expert in their own field. Little did I know the only publishing costs
were formatting the book to paperback and ebook, as the illustrator I hired already did the
book cover as well. They did have an editor mainly unintentionally damage the book by
sending the not-final version to be formatted instead of the final one.

So there I was, published and unknowingly with a flawed version. The publishing house was
mighty surprised when my book actually sold in the hundreds, despite the fact that they did
almost nothing for marketing. Most of the reviews were positive, and the negative ones all
spoke of editing flaws. You can well imagine my dismal response to discover my baby, the
product of years of effort was flawed.

I quickly took it off the shelves, and found an excellent editor to repair the damage. Lazlo
Ferran, an author himself did a marvelous job on the book and I self-published.

I sold maybe a few dozen books, some reviews were positive, others negative and I realized
without a doubt that the fight is far from finished. No matter how much I work, write and
re-write, some people would hate it.

So I lost hope, and in doing so found myself unchained and free. Let me elaborate.

By giving up on hope, and expecting nothing, I simply did not care anymore. I write and keep
on writing because I want to, not because I have any expectations. Doing so freed me from
the constant need to prove myself, to others and to myself.

I write because it’s what I love doing, and this is the first time in my life that I’ve done
something for me. But I do not write only for me. I know everyone’s life is hard, each in their
own way there is no comparison and it’s not a race. If I can alleviate some of that pain,
offer a reprieve from a not-so-simple life than by all means, read my book. If you like it,
that’s great, if you don’t then I’m sorry to have wasted your time, and promise to be better
next time if you give me a chance.

I’m currently writing the final chapter of the sequel: The Rise of Raymond Brooks.

Reviews of The Journals of Raymond Brooks by Amit Bobrov

You have subscribed to alerts for Amit Bobrov.

You have been added to Amit Bobrov's favorite list.

You can also sign-up to receive email notifications whenever Amit Bobrov releases a new book.