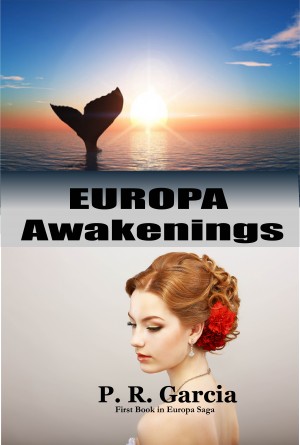 By P. R. Garcia
Rated 5.00/5 based on 1 review
When Europa's mother is killed, she discovers a secret - she was never meant to be born human. She must find the truth of who and what she is before her assassin finds her. Helping her survive are four companions: A protector, a male who has an unknown connection to her, her brother transformed as a dog and a mighty sperm whale. More
When the Oonocks sank their golden city of Atlantis beneath the ocean, only the words of Plato gave testimony of its existence. Now learn a new theory of who the Atlantians were and why they had to sink their city that eventful night. Find out why 6000 years ago, a race known as the Oonocks left their beautiful, lilac waters of Jupiter’s ice moon Europa to begin a new life on Earth. Discover the real Atlantians.

Europa is a nineteen year old human female who has never heard of the Oonocks. And, although she’s heard of the legend of Atlantis, she’s never giving the story much thought. That is until her mother is assassinated and her world is turned upside down. Venture with Europa as she discovers a secret attic above her mother’s bedroom where pictures of her parents hundreds of years old are kept. Gasp in amazement and confusion as she reads in her mother’s diary that she would be born as a human and never know who she really was. Go along on Europa’s journey of discovery, a journey of many dangers as her mother’s assassin chases her, determined to personally end her life. Cry with her as she loses almost everyone and everything she loves.

P.R. Garcia grew up in rural Michigan and is the youngest of three. She became a lover of Science Fiction at an early age when her parents took her to the movies. She was hooked the moment she heard Patricia Neal tell the robot Gort in The Day the Earth Stood Still “Klaatu barada nikto”. Inspired by what was possible, she and her dog spent many days in the fields behind her home fighting aliens and investigating unexplored planets. Her love continued to grow, and while in high school, the series Star Trek hit television, boosting her fascination with what might be out there. Her friends still comment on how she skipped the football games to stay home and watch each episode. When in her thirties, she became an award-winning basket weaver and continued in this craft for three decades. Upon retiring from her job of thirty years, she moved to San Diego, California. She volunteered for five years as a guide on the Whale Watching Boats, teaching people from around the world about the Pacific Ocean’s aquatic life.

At sixty-two, Ms. Garcia began to write her Europa Saga, a tantalizing, ten-part sci-fi series of intrigue, suspense, and mystery. Her saga is a fresh retelling of the story of Atlantis and its inhabitants. The books span six thousand years and four generations. Her story launched her into the world of a best-selling author.

Global warming, deforestation, pollution of our air and water, species loss, and the devastation of Earth itself are all subjects dear to Ms. Garcia’s heart. She has incorporated those themes into her later books, including books seven through nine of the Europa Saga and Extinction 2038. Her upcoming book Guardians of Earth and the sequel Guardians of Earth II, which should be released in early 2021, also deals with these subjects. If you’d like information on ways you can help stop global warming and other green topics, sign up for her newsletter.

Ms. Garcia also writes children’s books. A Cat for William is based on an authentic story about how a stray cat helps a man cope with a disabling disease. She is working on two more children’s books: The Story of Sudan: The Last Northern White Male Rhino and The Christmas Crayons, a story about a homeless boy who finds happiness in a box of crayons on Christmas Day. For more information, go to her web page: http://www.prgarcia1.com.

Who Am I?
Europa learns she was not meant to be a human. Than what?

Europa Saga
An assassin killed her mother and revealed the truth - she was never meant to be born as a human. Make the journey with Europa as she discovers the truth and becomes the being she was meant to be.

About the Series: The Europa Saga

Perhaps, the only science fiction saga encompassing five generations of one family. The Europa Saga is a story of betrayal, vengeance, greed, hate, love, discovery, lies and awakenings, aliens and possibilities, expanding across 6000 years of the Waters Family. The saga begins on Earth and will come full circle, as Europa learns the truth of the Oonocks, who she really is and fights against those determined to kill her and her race.

Also in Series: The Europa Saga

This book really surprised me. It starts off a bit slow, as the characters are developed, and relationships begun. However, the plot picks up, thickens, until by the end of the book, you'll have your socks knocked off. The best way to describe the book, is to say its Roddenberry-esque. If you want to pigeonhole it, consider it either as a coming of age novel for a young girl, or an epic of heroism and self discovery. Actually, its a fun combination of both those themes. The story concerns a girl on the verge of her 20th birthday, who lives with her mother and the house staff, on a well guarded estate next to the Pacific Ocean. The girl, Europa, is said to descend from nobility now in exile, due to an on going war waged by opposing members of the family. Along with Europa's three best girlfriends, is the dashing young Australian boyfriend, Terrance, the son of a ornithologist exploring the nesting habit of red breasted birdies. Europa's mother, Medaron, is a queen who's king died some 19 years earlier, leaving her to raise her daughter with the help of her brother Jeanip. Throw in Europa's loyal dog, and there's the story. Except, that Medaron's husband is an alien from one of Jupiter's moons, living on the bottom of the ocean. Europa's dog is really her brother who's a shape shifter. Uncle Jeanip is the general for the army of Oonocks, and Terrance's father is really----Oh, I don't want to spoil it for you. Lets just say all is not as it seems, at Mrs. Medaron Waters seaside estate.
My only issue, might be in the prose for the first couple of chapters. Its not at all bad, but Mrs. Garcia's style really evolves. I'm referring to minor stylistic problems, that an editor probably would have fixed. It's a fun read, and sure to be a hit with Scifi geeks of all ages and sexes. By the time you get to the end of AWAKENINGS, expect to be hooked to the world of the Oonocks. I'm already 2/3rds of the way thru the second novel. (Europa gets married in the next book.)

You have subscribed to Smashwords Alerts new release notifications for P. R. Garcia.