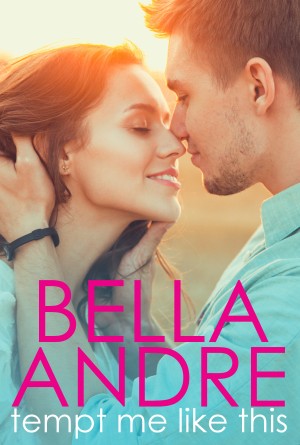 Tempt Me Like This: The Morrisons, Book 2 (Contemporary Romance)

"Addictions come in all shapes and sizes, but nothing feels as indulgent and irresistible to me as a new Bella Andre book." ~ Natasha Is A Book Junkie Reviews

As one of the biggest rock stars in the business, Drew Morrison can have anything—and anyone—he wants. Only Ashley Emmit, who has joined his tour to work on a college research project, is completely off-limits. Drew promised her father that, once the tour was over, he would send her home pure and untouched by the rock ’n’ roll world. But he has never been so tempted by anyone in his entire life. How is he going to make it through this tour without giving in to the urge to drag her into his arms and kiss her breathless?

Ashley has always lived by the rules. But from the moment she meets Drew, none of those rules make sense anymore. Not only does Drew’s music affect her deeply...but she’s never wanted to kiss anyone so badly. Not that a magnetic star like Drew would ever feel the same way about a brainiac like her, of course. And even if he did, she knows from painful experience that two people as different as they are simply don’t belong together.

But when the attraction between Drew and Ashley burns hotter every moment they’re together on the tour bus—and they begin to share their deeply hidden and emotional secrets—will either of them be able to resist temptation? Or could giving in to their feelings lead them straight toward a love they never saw coming...

THE SULLIVANS:
The Look of Love
From This Moment On
Can't Help Falling In Love
I Only Have Eyes For You
If You Were Mine
Let Me Be The One
Come A Little Bit Closer
Always On My Mind
Kissing Under The Mistletoe
One Perfect Night
The Way You Look Tonight
It Must Be Your Love
Just To Be With You
I Love How You Love Me
All I Ever Need Is You
Now That I've Found You
Since I Fell For You

REVIEWS:
"If you haven't read Bella Andre yet, you are seriously missing out! Her books will shock you, make you laugh, turn you on with her incredibly seductive heroes, and of course, make you fall in love! An auto-buy author!"
~ Under the Covers Reviews

"Bella Andre writes warm, sexy contemporary romance that always gives me a much needed pick me up. Reading one of her books is truly a pleasure." Maya Banks, NYT Bestselling Author

ABOUT THE AUTHOR:
Bella Andre's New York Times and USA Today bestselling novels have been #1 bestsellers around the world and she has sold more than 5 million books so far! Known for "sensual, empowered stories enveloped in heady romance" (Publishers Weekly), her books have been Cosmopolitan Magazine "Red Hot Reads" twice and have been translated into ten languages. She also writes "sweet" contemporary romances as Lucy Kevin. There are more than 50,000 5 star reviews for Bella Andre's books on Goodreads!

Having sold more than 8 million books, Bella Andre's novels have been #1 bestsellers around the world and have appeared on the New York Times and USA Today bestseller lists 90 times. She has been the #1 Ranked Author at Amazon (on a top 10 list that included Nora Roberts, JK Rowling, James Patterson and Stephen King). Apple iBooks named her one of their “Bestselling Authors of All Time” (alongside Nicholas Sparks, Nora Roberts and EL James). And Publishers Weekly named Oak Press, the publishing company she created to publish her own books, the Fastest-Growing Independent Publisher in the US. After signing a groundbreaking 7-figure print-only deal with Harlequin MIRA, Bella's “The Sullivans®” series is being released in paperback in the US, Canada, and Australia.

Known for “sensual, empowered stories enveloped in heady romance” (Publishers Weekly), her books have been Cosmopolitan Magazine “Red Hot Reads” twice and have been translated into ten languages. Winner of the Award of Excellence, The Washington Post called her “One of the top writers in America”; and she has been featured in Entertainment Weekly, NPR, USA Today, Forbes, The Wall Street Journal, and TIME Magazine. A graduate of Stanford University, she has given keynote speeches at publishing conferences from Copenhagen to Berlin to San Francisco, including a standing-room-only keynote at Book Expo America in New York City.

If not behind her computer, you can find her reading her favorite authors, hiking, swimming or laughing. Married with two children, Bella splits her time between the Northern California wine country, a 100-year-old log cabin in the Adirondacks, and a flat in London overlooking the Thames.

You have subscribed to alerts for Bella Andre.