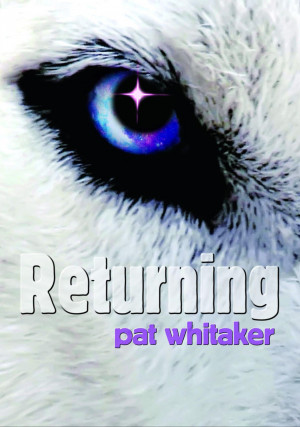 By Pat Whitaker
Rated 4.00/5 based on 3 reviews
Returning tells the story of an alien, exiled to Earth, trying first to survive in an unfamiliar world, and then to find a way to return to his own kind. In the process he learns as much about himself as he does about human kind.
The nature of the alien provides an opportunity for the reader to look at our world and ourselves with an external and unprejudiced perspective.

That's what this story has, and lots of it. This is one of the - very rare - books that I've read and felt like my perception on things is... insufficient?

Whitaker does an excellent job of taking us by the hand, leading us through a journey of our world, our people, our conflicts, and our motivations. It's a story about humanity, and about being human.

Without wanting to give too much away, the ending of the book was ... right.

First of all, I simply love the cover! It depicts one of my favourite mammals, the wolf, and is very striking.

This is a well-written sci/fi story and a fast read. I finished it in one day. There isn't a lot of dialogue; most of the story is told through the perceptions and thoughts of the alien as he interacts with the humans on Earth, but it's still very interesting. I did become a little lost partway through the book when Mr. Whitaker goes into great detail about the technical aspects of the rocket, but that's because I'm not much of a technical/engineer-type person. I was very impressed by the author's obvious thorough research of the technology.

All in all, I enjoyed reading the book and will definitely read more of Mr. Whitaker's work in the future.

New Zealand author Pat Whitaker creates a spellbinding science fiction story in RETURNING, delivering an alternative historical narrative based on thought-provoking scenarios. With an intriguing premise, Whitaker takes us from the tundra of Siberia to war torn Europe in a pursuit of rocket technology and Nazi political manipulations. The central character is Arthys, an intelligent alien parasite capable of attaching to any biological lifeform. Arthys is from an advanced civilization and has been banished to Earth for unspecified crimes. The impetus for the story arises in Arthys’ efforts to make his way back to his home-world.

RETURNING gives Whitaker the opportunity to explore several topics – animal consciousness, the depravity of war, human morality and motivation, and not least, the power of human love to lend meaning to life. The reader is treated to private discussions between the leaders of the Nazi hierarchy as Arthys travels from one host to another. Whitaker handles the transitions gracefully with a thorough knowledge of all the players. Indeed, so thorough was the historical accuracy, I found myself thumbing through Bullock’s HITLER: A STUDY IN TYRANNY to check the facts. Included is a fairly detailed exposition of the Nazi rocket program at Peenemunde that is also historically accurate.

The science fiction of RETURNING does not end with the parasite Arthys and his impact on history, but additionally we are treated to a clear and fascinating look at interstellar travel by an alien civilization thousands of years in advance of our own. As usual, Whitaker is scientifically up-to-date in his speculations.

RETURNING is a thoughtful read with enough intrigue to satisfy any reader. Whitaker’s prose style is straightforward and accessible, a great relief from some current authors whose works might leave you pondering as to the intent of their stories. Whether one is a connoisseur of science fiction or simply a casual reader, RETURNING is a must-read.

Available in hard-copy or ebook. whitakerbooks.wordpress.com