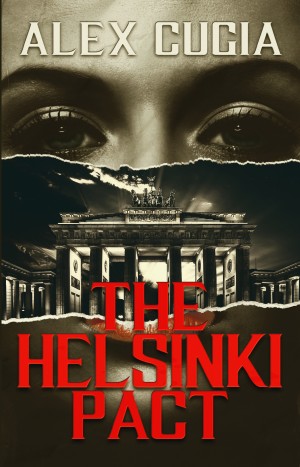 Rated 4.67/5 based on 3 reviews
Bettina unconscious on the rails. Will Hanno, Stasi agent, former lover, kill her before the next train thunders through? This fast-paced thriller mixes the real - Honecker and Vladimir Putin, say - with a gripping tale of greed, totalitarian brutality, financial fraud and corruption at the highest levels but also love, integrity and a fierce commitment to justice. It's all there waiting for you! More
Bettina lies unconscious on the subway tracks. Hanno, Stasi agent and her former lover, is gaining fast on the fugitives. Will she and Thomas make it out alive? Will Hanno shoot them before the next train thunders through?

Berlin, 1989. The Soviet empire is close to financial collapse. The East German public is rioting. The Party is falling apart and the dreaded Stasi is working corruptly to secure its leaders' futures. In Dresden KGB agent Vladimir Putin sets out to exploit this for his own benefit.

West Berlin economics student and small time currency blackmarketeer Thomas Wundart has been trapped into spying for the feared East German security organisation, the Stasi. His target is his oldest and best friend, Stephan, now important in West German finance as personal assistant to the head of Deutsche Bank and key to critical financial information the Stasi wants.
Thomas's Stasi manager is Bettina - beautiful, intelligent, strong-minded and feisty - and Thomas's emotions swing wildly between his growing infatuation with her and his fury at her icy control. He senses she's attracted to him but loyalty to her country come first.

After the Berlin Wall opens in November Colonel Dieter, a high ranking Stasi officer recognised for his integrity and loyalty to East Germany, sends Bettina and Thomas on a highly secret and very dangerous mission to Dresden and the Stasi HQ where they discover financial fraud, blackmail and murder. They learn also of a mysterious Frankfurt-based organisation with Stasi links, Phoenix Securities, which looks to benefit hugely from currency manipulation on unification.
Recalled urgently to Berlin with hard evidence of Stasi corruption at the highest levels they find tragedy. Realising the serious danger they're now in they hide away in a secret East Berlin flat before making a perilous run for it, desperately fleeing for their lives towards the West.

This is a taut, urgent, fast-paced thriller set in a totalitarian state in the very recent past. It cleverly mixes real events and real people with an imaginative telling of a gripping tale about financial fraud, chicanery and dodgy politics, hard to put down. The story involves greed, totalitarian brutality, murder and betrayal, love and integrity, Western arrogance and ignorance, and also a fierce commitment to justice. The characters are rounded and real and grow and develop as the story unfolds. Does crime pay? Will Bettina and Thomas both escape? Will the financial mastermind behind Phoenix make a killing? And what about Hanno and Putin? Because it's all there, waiting for you to find out, best get a copy of the book now before the price rises!
Download: epub mobi (Kindle) pdf more Online Reader
lrf pdb txt
Price: Free! USD
Add to Library
Create Widget
Tags: berlin wall dresden louisiana purchase black market stasi financial chicanery blackmail and murder currency fraud east germany 1989 escape tunnel


The plot and story telling of The Helsinki Pact deserves a five star rating. The plot is full of surprises.

The story begins in East and West Germany in March, 1989 shortly before the fall of the Berlin wall. The action is plentiful and intense.

Thomas Wundart is a West German economics student and aspiring opera singer. He is a scammer earning money by criminal activities in East Berlin.
Bettina List is an East German agent of the secret police, The Stasi.
Colonel Dieter is a high ranking officer in The Stasi.
Stephan Fischer is the assistant to Alfred Herrin the CEO of Deutsche Bank in West Germany. Stephan is Thomas's best friend.

Russia is facing financial collapse. Alfred Herrin represents the West German Government and has been authorized to facilitate a deal between Russia and West Germany. Russia will get the money it desperately needs in exchange for allowing the reunification of West and East Germany.
A second plot in the story finds four East Germans planning to dig a tunnel and escape to West Germany.
Unknown to the Stasi, Thomas has helped the four young people attempting to escape to West Berlin.
What the Stasi network does know, through his relationship with agent Bettina, is that Thomas has been involved in black market currency manipulation. He is arrested, and during interrogation Colonel Dieter learns Thomas's father was a successful West German banker at Bundesbank. Before his death, he enjoyed ties to other movers and shakers in the West German banking industry and government. Under threat of imprisonment in East Germany, Thomas agrees to become an informer reporting to Colonel Dieter.
Another twist in the plot is a group of six people headed by 'The Brain'. They plan to illegally collect millions of Deutsche Marks by manipulating the currency exchange rates during the East and West reunification.

The editing and sentence structure are to UK standards and are a bit different from what US readers are used to.

I strongly recommend this story.

Berlin 1989. The Soviet Union economy is bankrupt and the only hope is financial aid from the West German Bank. The Stasi corrupted members still try to benefit from their positions. One of the high rank party’s members does the right thing though, and sends two young spies to Stasi Headquarters to reveal financial fraud. Unfortunately, they face many obstacles on their way. Alex Cugia offers astounding political thriller involving financial fraud, murder and romance. I don’t want to reveal everything but some notable historical figures will also show up.

The story of financial fraud set in East Germany is appealing and intriguing. The author did a great job to combine the story with historical facts of the regime collapse in East Germany. Although the book is rather long and story line gets complicated, I have not found any inconsistencies or errors. The plot is well developed and I did not get confused.

The two main characters deserve more focus. Both of them have the same purpose/ mission but their relationships with Stasi have different background. Betina joined the party because she always believed in communism. According to her, the East is decent and happy place while in the West only buying things matters. Her beliefs and opinions prove political blindness. She has personal reason to hate the other part of the Wall- her father left her and her mother and started new family in West Germany.

Thomas, on the other hand, became a spy because he was forced to do this. Like many other people, he was tortured, blackmailed and in consequence broken. The ways that communists used to make people work for them were horrible and outrageous. Blackmail was one of the methods to make Thomas collaborate: “…we don’t particularly enjoy sending young people like you to jail. (…) This (…) will certainly destroy whatever career you had in mind”.
With time Thomas took his assignment seriously. However, it was about having purpose in his life, solving the case and doing the right thing rather than his attachment to the totalitarian state. Of course, beautiful Betina was another reason.

After collapse of the Berlin Wall, Betina and Thomas got into argument which part, East or West, is better place to live. They represent differences in communist and democratic philosophy. Actually, those polemics between people from different political systems are excellent elements of the book.

The young woman was strongly convinced that:
”We’ll become enslaved to Western desires for consumer goods, to buying stuff we don’t want and don’t need. I want to have time to think, to experience life and people, not be hit constantly with your advertising, your marketing to buy, buy, buy, get the latest, get the best, get the newest…’’
According to her: ”The Wall was to keep all that out, to keep your lifestyle out, not to keep us in”. She does not consider the Wall are something negative; she thinks about it as a protection from evil of Western world.

Thomas has different perspective of freedom and happiness: ”But walls are symbols, Betina…and any country which builds wall to keep others out, to try to keep themselves secure, has already failed”. He adds: ”It is human nature. People long for better life. You can’t just try to fence people in and tell them to try to be happy. Or tell them what they should believe in”.

The events unfold in rather slow pace but gripping escape scenes set in metro tunnel hooked me and I said to myself yeah, this is really good read!

There is one little element in Helsinki Pact that stole my heart… Trabant car! This was the car of 80s and early 90s in Central and Eastern Europe. I come from Poland and I have special sentiment for Trabants. I remember when still in late 90s parents of my friend were driving this wonderful car… spacious, noisy and emitting enormous amount of smoke. For me this is one of the symbols of life under communist regime and during transition period.

If you interested in history of Central and Eastern Europe and financial crime this book is definitely for you!
Overall rating: 5/5

Too much detail holds it back from being fast paced and action packed. Good story line though, a spy story with some romance, an unexpected twist and a happy ending for most of the good guys

You have subscribed to alerts for Alex Cugia.

You have been added to Alex Cugia's favorite list.

You can also sign-up to receive email notifications whenever Alex Cugia releases a new book.