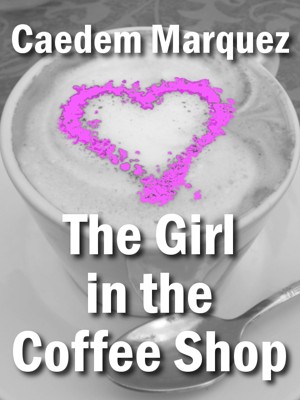 The Girl In The Coffee Shop

By Caedem Marquez
Rated 4.00/5 based on 2 reviews
Gertrude, a chubby college student studying at a coffee shop, is taken on the ride of her life when she decides to follow a cheating couple. Car chases and romantic interludes are the last thing she expects as she tries to break her first "Cheaters-meets-TMZ" news story, and what she finds will leave her breathless. More
Car chases, romantic interludes and breathtaking moments are not the norm for Gertrude, a single, chubby college student. But as she snacks on strawberry muffins, scones, and three Frappaccinos she watches a couple locking lips in a coffee shop. As she studies them, her journalistic mind goes into overdrive. There is no circle of untanned skin where a wedding ring should be. They must be having an affair. Hoping to break her first "Cheaters-meets-TMZ" news story, she decides to follow them to a motel. And so begins an adventure she could never have imagined, and what she uncovers is the last thing she ever expected.

An excerpt from the romantic comedy, "The Path Home" is also included.

Ink-stained hands and the clack of the keyboard, isn't that why we write?

Nothing makes him happier than to hear a reader has been taken away and lost in a story Caedem has created. 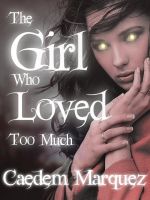 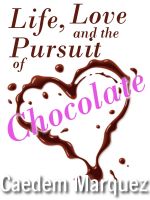 The Girl in the Coffee Shop, by Caedem Marquez, is a short, surprising story about a chubby college student turned journalist.

I received this story as a review copy, via Smashwords. Having read the blurb, I must admit that I approached this story with a bit of trepidation. I am a plus sized woman, so the description of Gertrude as chubby followed quickly by a list of her snack of "strawberry muffins, scones, and three Frappaccinos" seemed to be playing to the stereotypes of fat chick who eats too much junk food. And, yes, there were several description references that made me squirm, but the author at least let the main character handle them with a sense of humor.

Gertrude is sitting in a coffee shop attempting to write her college thesis on "Expanding Christian News in a Modern Internet World." Her Christian sensibilities are shocked when she sees a couple who are obviously having an affair. Gertrude's reaction is believably sophomoric, and she spends perhaps too much time saying "gross," "yuck," and "eww," but she gradually convinces herself that this is her path to news-anchor fame. "I could follow them. I could write my first major news story, I could put it on the web and get a million hits on Youtube. The people at church would applaud me for stopping such evil."

I admit that I wasn't at all comfortable with where this was going, particularly in regard to the main character's religious presumptions, but there really are people out there like that. I kept reading.

Gertrude takes off after the couple. I enjoyed the description that started the chase. "The Moped wheels scream to life as they burn rubber. Okay, okay, they don't scream, rather they sputter and protest but I do smell burnt rubber. I can't tell if the scent stems from my over-worked tires or the tire burning factory.... I prefer the former as the cause of the smell, after all, this is my first real-life chase."

There were a few run-on sentences exacerbated by punctuation choices that left me mentally gasping for breath as I raced through them. Most readers probably won't notice as they get caught up in the author's descriptions. The pacing is good. I was actually almost starting to like Gertrude. I could see some hope for her to grow up a little through the story, and I liked where the plot was going. Then it ended.

I was not prepared for the abrupt conclusion. I was only 57 percent through the Kindle document (Location 266 of 556) when I reached the end of the story. I see now that the Kindle version lists the inclusion of an excerpt from Caedem's upcoming book, but there is no such note on the Smashwords version. I'm trying not to hold that against the The Girl in the Coffee Shop, but I'm still disappointed.

Would I recommend this story? Yes, I think that I would, though with the above-noted reservations. Sometimes it is good to be taken out of your comfort zone. This little nibble of a story was a fun way to pass part of my lunch break. The real reason I liked the story is in the resolution, but I won't spoil that for you. You'll have to read it yourself.

(review of free book)
QuirkyGurl Media reviewed on on June 16, 2011

This short story was an interesting quick read, and the author has a distinctive voice. I found myself irritated at the main character Gertrude (mainly with her religious assumptions) but then the next I just felt sorry for her. There are comedic overtones, bracketed by down-to-the-bone clarity and insight. Marques is bound to be someone you will hear more of in the future.

Marquez certainly has a way with words and even if I hadn’t enjoyed The Girl in the Coffee Shop, I would have still given this book Five stars based on the excerpt of The Path Home (to be released later this summer 2011) at the ending. The writing in the excerpt is exquisite, and I will be one of the first people to get a copy of The Path Home when it’s released!

You have subscribed to alerts for Caedem Marquez.

You have been added to Caedem Marquez's favorite list.

You can also sign-up to receive email notifications whenever Caedem Marquez releases a new book.