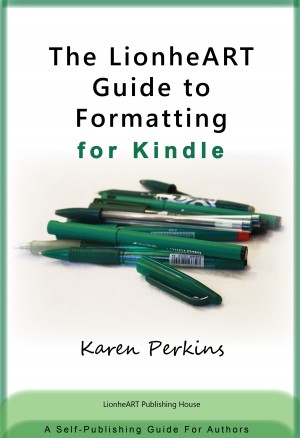 The LionheART Guide to Formatting for Kindle: A Self-Publishing Guide for Independent Authors

Karen Perkins of LionheART Publishing House has formatted approximately 300 manuscripts for Kindle and explains in a simple and clear manner how to format your manuscript in Word, and upload your finalised file to Kindle Direct Publishing,

Karen Perkins is the author of seven fiction titles in the Valkyrie Series of Caribbean pirate adventures and the Yorkshire Ghosts Series. All of her fiction titles have appeared at the top of bestseller lists on both sides of the Atlantic, including the top 50 in the UK Kindle Store. Her first Yorkshire Ghosts novel – THE HAUNTING OF THORES-CROSS – won the silver medal for European fiction in the prestigious 2015 Independent Publisher Book Awards in New York, whilst her Valkyrie novel, DEAD RECKONING, was long-listed in the 2011 MSLEXIA novel competition.

Her second Yorkshire Ghosts novel – KNIGHT OF BETRAYAL – opens with the assassination of the Archbishop of Canterbury in 1170, then follows the knights responsible when they flee north to Knaresborough Castle. As King Henry II and the whole of Christendom turn against them, they begin to come to terms with the enormity of what they have done, yet they cannot rest and return to Knaresborough 850 years later.

Karen’s latest book in the Yorkshire Ghosts Series, is now available for pre-order and will be released on 28th February 2017. PARLIAMENT OF ROOKS: HAUNTING BRONTË COUNTRY is set in both modern-day and Victorian Haworth – the West Yorkshire home of Charlotte, Emily and Anne Brontë. Parliament of Rooks delves into the era of ‘The Yorkshire Slavery’, and contrasts the beautiful, inspiring village of Haworth today with the slum – or rookery – it was during the industrial revolution: rife with disease, heartache, poverty, and employing child slavery in the mills.

Karen is also the proprietor of LionheART Publishing House. Established to help and support Indie authors with the practical side of publishing their books, including editing, formatting and professional cover design, Karen and her team have helped over two hundred books come to publication in the past three years.

She can be contacted by email:
karenperkinsauthor@gmail.com

About the Series: LionheART Publishing Guides

Comprehensive, step-by-step guides to editing and formatting books for Kindle, ePub and paperback in Word for independent authors.

Reviews of The LionheART Guide to Formatting for Kindle: A Self-Publishing Guide for Independent Authors by Karen Perkins

You have subscribed to Smashwords Alerts new release notifications for Karen Perkins.

You have been added to Karen Perkins's favorite list.

You can also sign-up to receive email notifications whenever Karen Perkins releases a new book.