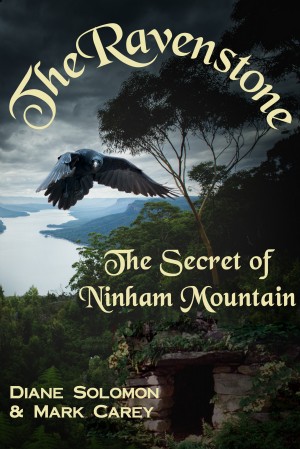 The Ravenstone: The Secret of Ninham Mountain

By Diane Solomon
& Mark Carey
Top 1 % Goodreads reviewer Dianne Bylo gives 5 Stars and exclaims, "simply magical!" 13-year-old twins discover an exquisitely carved stone artifact, the Ravenstone, and at the bidding of a mysterious old shaman, they embark on a harrowing quest across centuries. They must depend on their courage, their faith in their friends, and luck. Or is it destiny? More
Top 1 % Goodreads reviewer Dianne Bylo gives 5 Stars!

"Simply magical!" What more can one ask for?" "Two delightful characters are given the opportunity to make a mark on the history of mankind." "Perfect for family reading, and will hold the interest of even the most reluctant of young readers!" *
Imagine a raven appearing out of thin air and guiding you to an exquisitely carved stone artifact that glows with magical light. This is how the adventure begins for Nadia and Aidan Shaw, thirteen-year-old twins. Armed with the power of the Ravenstone and their own special gifts, they embark on a harrowing quest across centuries, at the bidding of a mysterious old shaman. They must depend on their courage, their faith in their friends, and luck. Or is it destiny?

**************************************
"Solomon and Carey's imaginative storytelling sweeps you into a fascinating tale of mystery and adventure. Young twins Nadia and Aidan stumble upon an ancient power that could help their family in the future, or trap them in the past forever." ~ Linda Zimmermann, successful author of 30 books about hauntings, the paranormal, and mysterious stone sites.

ABOUT THE AUTHORS:
Diane Solomon has had a wonderfully diverse career path that has included her own variety show on BBC TV in England during the late seventies, and major tours with Glen Campbell and Kenny Rogers. She is also a published author with a successful book entitled, Chronic Fatigue Syndrome: a guide to the homeopathic treatment of CFS/M.E.

Diane is the author of "88 Guys for Coffee," a hilarious and heartwarming novel about of a woman's 5-year online dating odyssey. Diane also wrote "Chronic Fatigue Syndrome: a guide to the homeopathic treatment of CFS/M.E." and "The Ravenstone: The Secret of Ninham Mountain," a middle-grade fantasy mystery written with her husband, Mark Carey.

Diane grew up in Oregon, and says she can’t remember a time when she wasn’t singing. Her father gave her a guitar for Christmas when she was 13, and she taught herself folk and country styles, and started to write songs. At 19, believing her first talent was acting, she headed off to England, determined to study acting at the Royal Academy of Dramatic Art. But life can take some funny turns. Before she could arrange an interview, she was literally “discovered,” playing her guitar and singing to a small, private, New Year’s Eve party at a London hotel.

A BBC television producer was there, a screen test followed, and the result was a network primetime series of variety specials! “The Diane Solomon Show” of the late 70s, was a great success, and she quickly became a regular on British TV, with other specials of her own, and numerous guest appearances, including several Royal Gala Specials. She recorded 5 albums, appeared on countless radio shows, TV hosting, and musical theater productions. She headed four major UK Theater concert tours of her own, toured with Glen Campbell on three European tours, and opened for a major Kenny Rogers’ tour in 1991.

But then life took another turn, this time not so fortunate. She was diagnosed with the infamous M.E., or Chronic Fatigue Syndrome, and for the next three years was too ill to walk across the room unaided. For a total of seven years she struggled with half a life. In the darkest hours songwriting was her saving grace, and the title cut of her new CD, “Good Things Don’t Come Easy” was born of this troubled time. With the help a brilliant German homeopathic system of healing, plus nutrition and herbs, she regained her health. Diane was so impressed with these alternate therapies that she has since gained degrees in both nutrition and homeopathy, achieving a doctorate degree from the British Institute of Homeopathy.

She has practiced nutrition and homeopathy for the last twenty years, using a combination of nutrients, herbs, homeopathic remedies, and diet and lifestyle recommendations. Whatever works for each very individual person. Her specialties are women’s issues, perimenopause and menopausal problems, Chronic Fatigue Syndrome, asthma and allergies, migraines, and arthritis. But she has worked successfully with many other problems, such as eczema and psoriasis, fibromyalgia, ADD and ADHD, OCD, insomnia, and much more.

She describes dealing with people’s health issues as a kind of “onion layer” experience. Herbs, nutrients, and lifestyle changes are powerful, yet are in some way addressing the outer layers. They help enormously, but she has found that the major changes in people’s health comes from a deep homeopathic remedy, known as the constitutional remedy. Homeopathy is not an exact science, and thought, attention, focus, intuition, and yes, luck are involved in finding this remedy. When the right deep remedy is chosen, improvements in a client’s well being, both physically and psychologically, can be dramatic, even life-changing!

She has written two screenplays, and is now writing two novels, one of her own, plus a new novel with her husband. She has also written a practitioners’ guide to Chronic Fatigue Syndrome, hoping to be able to help others afflicted with this dreadful disease. This book, called Chronic Fatigue Syndrome: a guide to the homeopathic treatment of CFS/M.E. was published Nov 20, 2015.

*** What's the story behind this book?

I suffered from Chronic Fatigue Syndrome, myself, for seven long hard years. Then a homeopathic remedy cured it, in two weeks. I was astounded and amazed and thrilled beyond words - I had tried everything (I thought!)

I then studied to add an advanced degree in homeopathy to my nutrition degree, and practiced for over 20 years. One of my specialties was CFS, and I am deeply grateful that I was able to help approximately 100 sufferers, during those years.

Homeopathy is powerful and deep-acting!

Now that I have retired from practice, I needed to spread the word, and hope my book helps those still struggling with the dreadful scourge that Chronic Fatigue is.

***What motivated you to become an indie author?

I did not have the patience or tenacity to write to a zillion agents and publishers, and nervously await the mailman or an email! It can take months and months.

And I believe social media and the power of grassroots people all over the world, on the internet, has changed the face of publishing forever!
How has Smashwords contributed to your success?
It hasn't yet, but I hope it is going to! :-)

*** What is the greatest joy of writing for you?
Two things: the thrill of knowing someone else will read my words and benefit from them, so there is a sense of giving back. I am immensely and eternally grateful that homeopathy saved me from the dreaded CFS, and I want to help others.

The second is pure, creative, and meditational: getting lost in the moment of thought, of words, of ideas, of pictures I am creating. And experiencing the flow of the moment of creative expression. It is bliss!

With regard to the readers of this first book on Chronic Fatigue Syndrome, I suspect many are CFS sufferers. My heart aches for them. And other readers may be homeopaths or other medical practitioners who I pray find useful remedies, ideas, tools to help their patients with the illness. I respect and admire them, having worked in practice myself for many years. It is hard work, but very rewarding!

I have just finished a new novel, written with my husband, Mark Carey. It is a middle grade fantasy, mystery, adventure. Pure fun, with honeor, glory, redemption, and a great deal of heart. We are in final prep for its publication Oct 1 2016.

*** What inspires you to get out of bed each day?

*** When you're not writing, how do you spend your time?

Gardening, cooking, walking, cuddling my cat, connecting with friends... and all the time laughing!!
Do you remember the first story you ever wrote?
It was about a young girl walking into a church for the first time and the feeling that came over her. It was a beautiful moving image. It was the 4th grade and I remember the teacher telling me then that maybe I'd be a writer when I grew up! Well, here I am, finally, but first I had a singing career in the UK, then years as homeopath and nutritionist. But I knew that the path of writer awaited, in the distance. Now it is here and I am loving it!

*** Do you remember the first story you ever read, and the impact it had on you?
The biggest impact stories for me were 101 Dalmations, in the 3rd grade. And Wrinkle in Time a year or two after that. Great stories, well told! They inspired me to float in my imagination, and say "What if?" all the time. Asking "What if?" is how my ideas arrive.

*** What do you read for pleasure?
Thrillers, women's fictional books about life, family, etc, like those of Barbara Delinsky. Also non-fiction books in the spiritual or self-help realm with an emphasis on the psychological. I am endlessly fascinated by people - why people do what they do. Humans are a strange bunch!

*** What is your e-reading device of choice?

I don't use one! I sit in a leather recliner with laptop, and voice recognition software.

Reviews of The Ravenstone: The Secret of Ninham Mountain by Diane Solomon & Mark Carey

You have subscribed to alerts for Diane Solomon.

You have been added to Diane Solomon's favorite list.

You can also sign-up to receive email notifications whenever Diane Solomon releases a new book.