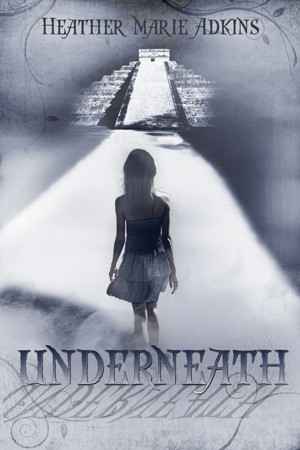 By Heather Marie Adkins
Rated 4.75/5 based on 8 reviews
An ancient city, entombed beneath a museum that seeks to understand the brutal race that once inhabited the underground world.

A young woman with special empathic powers offered a job to create an exhibit of the city's artifacts.

Underneath, they wait for her.

Heather Marie Adkins loves magick and words, but not necessarily in that order. She can often be found wrangling chickens in her backyard, pulling weeds from her herb garden, and saving field mice from her cats—when she isn’t plotting her eventual move to Ireland. She worships the moon and stars, and loves the feel of grass beneath her bare feet.

She is the author of numerous titles including: The Temple (Vale Avari, Book One); Abigail (Witch Faery, Book One); His Haunting Kiss (His Kiss, Book One); Mother of All (Hedgewitch Mysteries, Book One); and Heaven Below (Goddess of Ptalonia, Book One). Her novels have hit several bestseller lists since she began publishing in June 2011.

Heather lives in north-central Kentucky with a house full of animals and the love of her life—all of whom drive her crazy.

Detailed, fast-paced action loaded with solid characters creating an book that I didn't want to put down. What exactly was so sinister about the Garneria exhibit that Rebecca had troubles with it? The author did a good job getting the action up to speed quickly and the suspense was building rapidly in the beginning chapters. I would have given it 5 stars as I like a quick-read with good suspense, good plot and also a read that leaves me as a reader hanging with some possiblities but....I thought the ending was rushed. Chapter 9 was the end of this story and a catch all: a huge wrap up, a "I am about to run-out-of-paper so I have to cram it all down to a couple paragraphs", to me, the last chapter was a disappointment

Rebecca has just been offered an exhibit at the Museum of Ancient History. The idea is to promote the underground city that was found in a cavern below the museum. But something evil happened there. Rebecca is an empath and has no desire to even go near the city but in the end she goes.

Adara, Rebecca’s daughter, is excited about the new exhibit. And Rebecca’s new boss, Darren, is also thrill to have her there. Rebecca learns that Darren is also an empath when he talks about a bad feeling when he is around the underground city. But that doesn’t stop them from working on the exhibit.

While working together, Rebecca and Darren start a connection that goes to the next level. Then Darren doesn’t show up for work. Knowing something is wrong and with the urgings of Adara goes on the hunt for him.

This is a great story!! Way too short. I read it quickly and was left wanting more. The only thing negative I could say was I wish it was longer. I would like to know more about the underground city. I cannot wait to read Heather’s other stories.

This short story really captured my attention and held it all the way through. I love archaeology and the paranormal so this was right up my alley. I would have loved to know more about the ancient civilization and where they came from, etc, but this WAS a short story. Not a novel. lol Two thumbs up! Thoroughly enjoyable.

If you like archaeology, ancient civilizations, and tortuous sacrifices--you'll love this. Very fast read! Enjoyed it.

Would love to see some more like this...I got creeped out with this one.

I really liked this story.
The protagonist is fierce and brave and quite sarcastic and I love that in a heroine.
Plus, the plot was really good and suspenseful till the very end.

What a great short story! The characters came alive on the pages. I look forward to reading more from this author.

You have subscribed to alerts for Heather Marie Adkins.

You have been added to Heather Marie Adkins's favorite list.

You can also sign-up to receive email notifications whenever Heather Marie Adkins releases a new book.