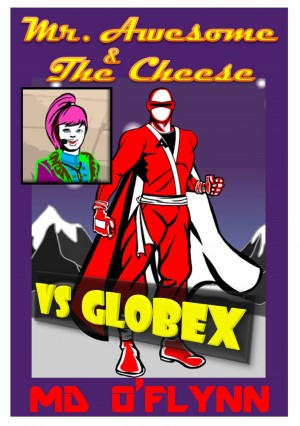 Mr Awesome and The Cheese Vs GlobeX

MD O’Flynn is retired from the military and when he’s not knocking out Papa duties he spends his time writing, coaching, and convincing his wife that writing could be his second career. He has worked in/resided in/visited six of seven continents and has lived and travelled extensively in Latin America. He lives with his family in South Carolina.

Like its superhero cast members, this story was indeed Awesome. It feels like something Joss Whedon would write. I liked that the story jumped right into the action, but we still got the idea of what was going on anyway. It's also great to see a male and female superhero team where they're both active and competent players on a mission.

The attention to detail was great for such a short story, including the mechanism for the super adrenal gland and its connection to Mr. Awesome's backstory. The super-villain's portrayal was a bit ableist, but he was still a fun character.

Not really my style, but it is a fun read. The title gives an accurate image of the universe.

You have subscribed to alerts for M D O&#039;Flynn.

You can also sign-up to receive email notifications whenever M D O&#039;Flynn releases a new book.