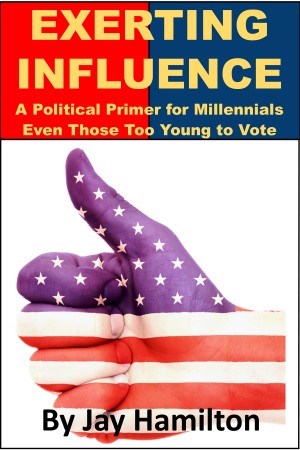 Exerting Influence: A Political Primer for Millennials, Even Those Too Young to Vote

Jay Hamilton was a freelance photojournalist specializing in motorsports, through most of the 1970s. His work was published in national magazines such as "Cycle Guide" and "Modern Cycle" as well as smaller publications. He had his own darkroom where he processed black and white as well as color photographs, and color slides as well. He still enjoys riding his motorcycles, though he drives a mini van these days, instead of a collection of Bug Eye Sprites that he no longer owns. His collection now is limited to a Chrysler Town and Country, a Honda Shadow 750, a Honda CL-360 from the 1970s and a 1982 Honda Civic Wagovan. He uses digital cameras these days, and would love to have one of those new Lumia 950 phones with the 20 megapixel camera built in. He is a bit of a computer nerd, but does not have the funds to own any real mega computers, though he does have a Galaxy Tab S 8.4" high def tablet, which fits in his pocket and largely takes the place of his Gateway laptop, and an old P4 desktop that he built from scratch. He likes dogs, and very much loved his Chocolate Lab puppy that was dognapped from his home one Sunday morning a couple of years ago. He is looking for a replacement. He also has several Calico cats. He is working on a solar installation to reduce electric costs, and has a Champion 3500 watt generator wired into his power pole through a breaker, so he can manually switch between the power utility and his own power. He is an avid gardener as well. Like the rest of us at Crossroads Publishing, he hopes the sale of his books will supplement the meager check he gets from Social Security (being a freelance photojournalist is not conducive to having a large Social Security check.) He is a hopeless liberal, not at all happy with Republicans, but not fond of Obama either. He fully expects to live well past the age of 90, and is in very good health, and doesn't look anywhere near his real age, which he refuses to disclose.... And yes, he is still single, and expects to remain so.

Reviews of Exerting Influence: A Political Primer for Millennials, Even Those Too Young to Vote by Jay Hamilton

You have subscribed to alerts for Jay Hamilton.

You have been added to Jay Hamilton's favorite list.

You can also sign-up to receive email notifications whenever Jay Hamilton releases a new book.