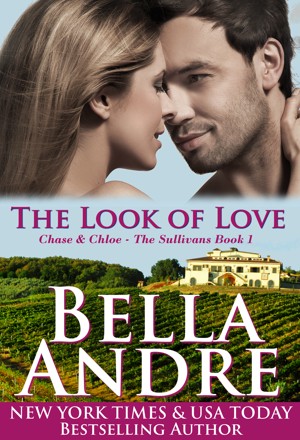 The Look of Love: The Sullivans, Book 1 (Contemporary Romance)

By Bella Andre
Rated 4.25/5 based on 4 reviews
Over a million books sold so far! Fall in love with the Sullivans...

When Chase Sullivan finds Chloe and her totaled car in Napa Valley, she's so lovely, inside and out, he wants to love - and protect - her. Only, she has vowed never to trust a man again, despite his loving looks and sinfully sweet caresses. But is he the only exception?

"Emotional, sexy, lovely!" NYT bestseller Carly Phillips More
"Not since Nora Roberts has anyone been able to write a big family romance series with every book as good as the last. Bella Andre never disappoints." Revolving Bookcase Reviews

Millions of readers around the world have fallen in love with Bella Andre’s New York Times and USA Today bestselling contemporary romances about the Sullivans!

BOOK DESCRIPTION: Chloe Peterson is having a bad night. A really bad night. The large bruise on her cheek can attest to that. And when her car skids off the side of a wet country road straight into a ditch, she's convinced even the gorgeous guy who rescues her in the middle of the rain storm must be too good to be true. Or is he?

As a successful photographer who frequently travels around the world, Chase Sullivan has his pick of beautiful women, and whenever he's home in San Francisco, one of his seven siblings is usually up for causing a little fun trouble. Chase thinks his life is great just as it is--until the night he finds Chloe and her totaled car on the side of the road in Napa Valley. Not only has he never met anyone so lovely, both inside and out, but he quickly realizes she has much bigger problems than her damaged car. Soon, he is willing to move mountains to love--and protect--her, but will she let him?

Chloe vows never to make the mistake of trusting a man again. Only, with every loving look Chase gives her--and every sinfully sweet caress--as the attraction between them sparks and sizzles, she can't help but wonder if she's met the only exception. And although Chase didn't realize his life was going to change forever in an instant, amazingly, he isn't the least bit interested in fighting that change. Instead, he's gearing up for a different fight altogether...for Chloe's heart.

THE LOOK OF LOVE is part of Bella Andre's #1 bestselling series about The Sullivans. While it can easily be read as a stand-alone story, you'll likely enjoy reading the other books, too.

THE SULLIVANS:
The Look of Love
From This Moment On
Can't Help Falling In Love
I Only Have Eyes For You
If You Were Mine
Let Me Be The One
Come A Little Bit Closer
Always On My Mind
Kissing Under The Mistletoe
One Perfect Night
The Way You Look Tonight
It Must Be Your Love
Just To Be With You
I Love How You Love Me
All I Ever Need Is You
Now That I've Found You
Since I Fell For You

REVIEWS:
“Each book is so remarkable and you really come to love the characters. This series is incredible. It's one of my favorites. If you haven't started them yet, you are missing out!" ~ Guilty Pleasures Reviews

"I am in love with the Sullivans. If you are looking for something sweet and sexy then this series is absolutely perfect for you. They are all amazing!" ~ Reading, Eating & Dreaming Reviews

"Bella Andre writes warm, sexy contemporary romance that always gives me a much needed pick me up. Reading one of her books is truly a pleasure." Maya Banks, NYT Bestselling Author

ABOUT THE AUTHOR:
Bella Andre's New York Times and USA Today bestselling novels have been #1 bestsellers around the world and she has sold more than 5 million books so far! Known for "sensual, empowered stories enveloped in heady romance" (Publishers Weekly), her books have been Cosmopolitan Magazine "Red Hot Reads" twice and have been translated into ten languages. She also writes "sweet" contemporary romances as Lucy Kevin. There are more than 50,000 5 star reviews for Bella Andre's books on Goodreads!

Bella Andre is the New York Times, USA Today and Publishers Weekly bestselling author of “The Sullivans” series. Having sold more than 3 million books, Bella Andre’s novels have been #1 bestsellers around the world and have appeared on the New York Times and USA Today bestseller lists 16 times. After signing a groundbreaking 7-figure print-only deal with Harlequin MIRA, Bella’s “The Sullivans” series is being released in paperback in the US, Canada, the UK, and Australia. She has been the #1 Ranked Author at Amazon (on a top 10 list that included Nora Roberts, JK Rowling, James Patterson and Steven King), and Publishers Weekly named Oak Press (the publishing company she created to publish her own books) the Fastest-Growing Independent Publisher in the US. Known for “sensual, empowered stories enveloped in heady romance” (Publishers Weekly), her books have been Cosmopolitan Magazine ”Red Hot Reads” twice and have been translated into ten languages. Winner of the Award of Excellence, The Washington Post called her “One of the top digital writers in America” and she has been featured by NPR, USA Today, Forbes, The Wall Street Journal, and  TIME Magazine. A graduate of Stanford University, she has given keynote speeches at publishing conferences from Copenhagen to Berlin to San Francisco, including a standing-room-only keynote at Book Expo America in New York City.

Also in Series: The Sullivans

An absolutely great and damn hot as well. Looking forward to continuing the saga of the Sullivans.

You have subscribed to alerts for Bella Andre.