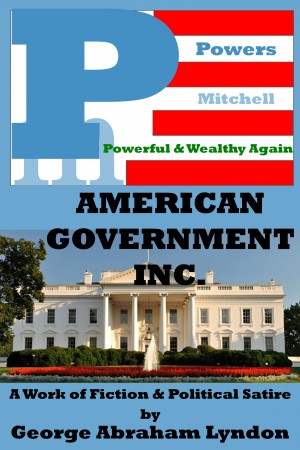 The American Government, Inc., A Work of Fiction and Political Satire

Thayer Andrew Powers is the unexpected winner of the 2032 presidential election. He relies on his close advisors to help him lead the country. William (Billy) Mitchell is his Vice President, a veteran Congressman, and leads the Cabinet. Steve Edward is the smartest man in the room, and Powers makes him the Secretary of Defense, Secretary of State, and Secretary of Homeland Security. Stephen Schmidt is Powers' closest confident, but he has a deep secret, long-term roots to the Alt-Right and white nationalists. Powers also brings his two children and their spouses into the Cabinet - he has trained each to think like businessmen and women.

Powers approaches every situation like he was contracting to build a factory, road, or airport. Will his approach work with foreign countries like China, Russia, Israel, Pakistan, Iran, Korea, and how does he deal with ISIS successor terrorist organization, the SJMC which rules a large portion of the Middle East and portions of 30 countries. And what will Powers do if he has to open the nuclear football?
Download: epub mobi (Kindle) pdf more Online Reader
lrf pdb txt
Price: Free! USD
Add to Library
Create Widget
Tags: political president satire future history nuclear

This is an unconventional book, so I will write an unconventional review. I opted to read it because the description sounded like my own book, Capital Blues. The similarity ended there. First of all, George Abraham Lyndon is a pseudonym. The author tells us in the afterward that he chose the given names of the three presidents he admires most. One must worry about anyone who claims to admire Lyndon Johnson, the founder of the Great Society that still burdens us sixty years later. American Government, Inc. is a parody of a hypothetical Donald Trump presidency as viewed by a denizen of left. The story is told as pure narration by a researcher 130 years in the future, therefore, there is no dialogue nor developed characters. The characters are merely names that the narrator continually pummels. The only good guy is, not surprisingly, named Lincoln. The hypothetical president is named Powers and he runs a mega corporation that he uses to build all the projects he proposed in his campaign promises, such as the southern border wall and a myriad of infrastructure projects. Paradoxically, the infrastructure projects create plenty of jobs but the unemployment rate still rises. Naturally, Powers prospers personally from all this. On the first day of his presidency, he signs something 250 executive orders that the reader is expected to digest. This book was made for skimming. Of course they are all Donald Trump’s ideas and they are put forth with the implication that they lead to catastrophe. The catastrophe they incite is no less than civil war. American Government, Inc. is a short book and I guess the best thing I can say about it is that it’s priced right. It’s free.

You have subscribed to alerts for George Abraham Lyndon.

You have been added to George Abraham Lyndon's favorite list.

You can also sign-up to receive email notifications whenever George Abraham Lyndon releases a new book.