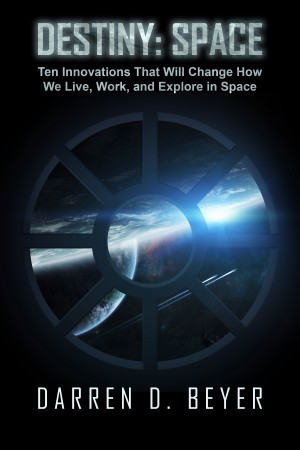 Destiny: Space - Ten Innovations That Will Change How We Live, Work, and Explore in Space

Darren Beyer was born in Washington, D.C., but quickly became a child of the world. His family moved overseas when he was age two and together they traveled extensively throughout his childhood. Darren draws on these experiences to add an element of realism and depth to his writing. At the age of six, he was awakened in the middle of the night by his mother to watch live pictures being broadcast from the surface of the moon during the Apollo 17 mission. At that moment, even at so young an age, he decided to pursue a career related to the space program. In high school, he took classes in math and science. In college at Virginia Tech, he enrolled in the engineering school and received a degree in aerospace engineering in 1989. Following graduation, he was hired by NASA at Kennedy Space Center, where for nearly ten years he worked as a Space Shuttle experiment engineer. While there, he worked on the Hubble launch, as well as numerous Space Lab and other scientific missions. Experiments he was responsible for ranged from telescopes to frog life support. He conducted astronaut training, performed installations onboard the Shuttle just prior to launch, and was part of the recovery crew following landing. Darren has had the honor of working onboard every Space Shuttle orbiter except Challenger. In late 1998, Darren left NASA to become an entrepreneur, and, after more than seventeen years, an author. He is a student of science and technology and is an instrument-rated private pilot. Darren lives in California near San Francisco with his wife, dogs, cats and fish.

Reviews of Destiny: Space - Ten Innovations That Will Change How We Live, Work, and Explore in Space by Darren Beyer

Well researched, everything seems reasonable. I have an interest in the future of space travel, and found this work summarizes well many of the likely courses of the near future.

You have subscribed to alerts for Darren Beyer.

You have been added to Darren Beyer's favorite list.

You can also sign-up to receive email notifications whenever Darren Beyer releases a new book.