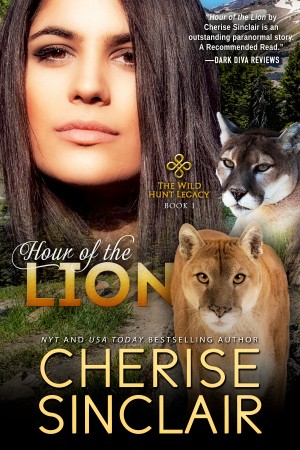 Hour of the Lion (The Wild Hunt Legacy 1)

Rated 4.50/5 based on 4 reviews
Ex-Marine, now black ops agent, Victoria knows the military is her home--until a sniper’s bullet changes her life. When a dying boy transforms into a cougar—and bites her—she learns of an entire hidden society. He begs her to tell his grandfather of his death and not reveal the shifters’ existence. She can’t refuse, but what if the creatures pose a danger to the country she swore to protect? More
“Put Victoria with two Alpha brothers, and wow, oh wow, your socks will be knocked off.”

First a Marine, then a black ops agent, Victoria Morgan knows the military is where she belongs…until a sniper’s bullet changes her life. Trying to prove she’s not washed up, she rescues a young man from kidnappers. When the dying boy transforms into a cougar—and bites her—she learns of an entire hidden society. He begs her to inform his grandfather of his death and to keep the secret of the shifters’ existence. She can’t refuse, but what if the creatures pose a danger to the country she swore to protect?

As guardian of the shifter territory, Calum McGregor wields the power of life and death over his people. When a pretty human female arrives in their wilderness town, he and his littermate become increasingly concerned. Not only is the little female hiding something, but she is far more appealing than any human should be.

While investigating the shifters, Victoria begins to fall in love with the werecat brothers and the town as well. For the first time in her life, she might have a real home. Her hopes are crushed when a deadly enemy follows her from the city, and the shifters discover she knows their secret. Now nobody is safe—least of all Victoria.

Authors often say their characters argue with them. Unfortunately, since Cherise Sinclair’s heroes are Doms, she never, ever wins.

Fledglings having flown the nest, Cherise, her beloved husband, and one fussy feline live in the Pacific Northwest where nothing is cozier than a rainy day spent writing.

Sent only on the day of a new release, Cherise’s newsletters contain freebies, excerpts, upcoming events, and articles. Sign up here: http://www.CheriseSinclair.com/NewsletterForm

Enjoyed this book. Thank you

This was a first by this author for me and I greatly enjoyed it. Fast paced and delightfully spicy, I just ordered another book by her today.

My review from Goodreads listed below.

Hour of the Lion by Cherise Sinclair

With this book, Ms Sinclair has become a ‘go to’ author for me in the paranormal genre.

“Yea though I walk through the Valley of Death, I shall fear no evil, for I am the baddest M-F in the valley.” This line described Vic Morgan’s outer shell to me. “Coffee and chocolate—the inventor of mocha should be sainted,” described Victoria’s inner girl.

This story was wonderfully written and full (28 chapters) of characters and details that made me understand this new paranormal world. It made me want to continue reading this series so much that I immediately went and purchased WINTER OF THE WOLF.

Vic is such a strong character in this story “Pain is weakness leaving the body.” And she has the quirkiest inner voice that on occasion comes out in the funniest lines…“Gramps always says people only swear because their vocabulary is limited.” Vic… “’In certain trying circumstances, urgent circumstances, desperate circumstances, profanity furnishes a relief denied even to prayer,’” Mark Twain…

The relationship between Calum, Vic and Alec was established through a one on one bases in the beginning of this story and continued through the middle of the book. Only toward the end did it, in my opinion, form a triad.

There was light ‘tie-me-ups’ and Calum and Alec were definitely Alpha’s but the sex scenes though descriptive, were not written in the Erotica fashion I’m use to. I always felt there was something missing. Even the ‘gathering’ scenes lacked a certain something. There was this one M&M scene that sounded interesting and should have been explored….I would have liked to read more about the brown and green M&Ms…but alas they left it to my imagination.

Despite that one weakness, this story as a whole was good read for me. Now my last quote in this book that I had to add…because it was that good.
“Lord, look down on Thy Servant! Bad things have come to pass.
There is no heat in the midday sun, nor health in the wayside grass.
His bones are full of an old disease—his torments run and increase.
Lord, make haste with Thy Lightning and grant him a quick release!”

(reviewed 35 days after purchase)
Cordy K. reviewed on Dec. 3, 2011
(no rating)
Finished the book today; loved it.
My first Cherise Sinclair book - and I don't think it will be my last one. :)

Another winner from Cherise Sinclair! I always watch for her books, she's a solid writer that I can depend on to turn out well-written stories. This is another well-written story. I stayed up wwwaaaayyyyy too late reading it so I could finish it, I never could find a place I could make myself put it down. It is a longer novel too, hard to find in the ebook world. It is well worth the price and the time to read it.

You have subscribed to Smashwords Alerts new release notifications for Cherise Sinclair.

You have been added to Cherise Sinclair's favorite list.

You can also sign-up to receive email notifications whenever Cherise Sinclair releases a new book.