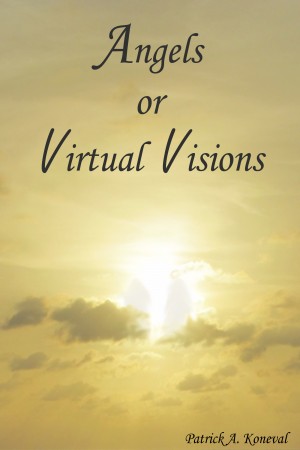 Daniel is your typical father with a wife, two kids, and a good teaching job. However, when Daniel is approached by Andrew, an angel, he is given an assignment that leads him on a wild adventure as well as opens his eyes to the true power of God. Throughout his incredible journey, Daniel faces many challenges, but nothing more challenging than Joshua, a reporter who thinks Daniel’s brain research, and not God's help, is allowing Daniel to have special abilities.

My name is Patrick Koneval, and I have been married to my wife Sandy, for 23 years, but we have been together for 30 years. I have two kids, and I have been teaching for over 25 years. I have always been interested in God, Jesus, and angels. I have read many books about these subjects. Some I agree with, and some I do not, so I decided to write my own book to share my ideas, thoughts, and opinions. It is what I believe. I have a strong faith and believe everything happens for a reason. I also believe that God loves us, but many of us are simply out of touch with Him. I wrote the book because I believe we are missing out on some of the most important lessons God is trying to teach us.

I am not sure what your beliefs are, but I believe that we are never alone. On February 22, 2016, my father-in-law passed away. We were all in the room with him, and there were several things that helped us cope with his death. A few days before he passed, he started talking to us about deceased relatives. He also started to see them in his room. When he looked over and asked his wife, Kathy, if she saw Keith, her deceased brother, she asked him if Keith was in the room. He said so matter-of-factly, that he was. He was also calling for, and talking to his parents the night before he died. What I will remember most is each one of my kids went up to him and gave him a kiss on his forehead, and told him it was ok to go. Somehow, before he took his last breath, he turned his head to the side where his wife and son were standing, and gave the biggest smile. It was almost like he was really, really, happy to see someone. He then turned the other way to my wife, kids, and myself, and gave the same smile. He took his last breath right after that. It was very comforting to know that he was happy right before he passed.

Learn more about Patrick A. Koneval

Reviews of Angels or Virtual Visions by Patrick A. Koneval

You have subscribed to Smashwords Alerts new release notifications for Patrick A. Koneval.

You have been added to Patrick A. Koneval's favorite list.

You can also sign-up to receive email notifications whenever Patrick A. Koneval releases a new book.