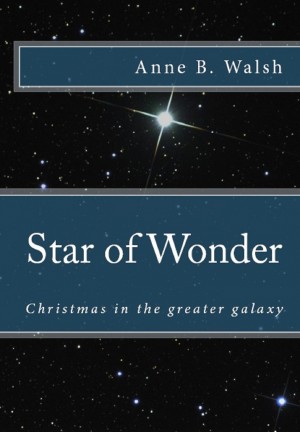 By Anne B. Walsh
Four previously-published Christmas stories about the starfaring, music-loving folk known as the Aelur, who overcame their intended destiny to chart their own paths, now reside in one FREE volume. "Glorious Song of Old", "Enough", "The Tenth Lady", "Sun and Moon and Stars of Light"... will you sing along as you read, or at least hum a few bars? More
Welcome to the greater galaxy! Meet the starfaring folk known as the Aelur. They love music, laughter, Christmastime, and playing tricks. Will you join in their "Glorious Song of Old", or will you say that you have had "Enough"? Perhaps you are waiting for "The Tenth Lady" to arrive and complete the dance? Or perhaps you want the Aelur starship, the Wild Rover, to whisk you away so that you may see the "Sun and Moon and Stars of Light" for yourself? Wherever you choose to begin, be sure to bring your singing voice, your dancing shoes, and your imagination!

Reviews of Star of Wonder by Anne B. Walsh