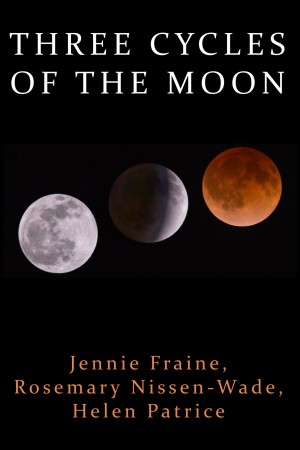 Three Cycles of the Moon

By Rosemary Nissen-Wade,
Jennie Fraine,
& Helen Patrice
Three Cycles of the Moon is a collection of poetry by Helen Patrice, Rosemary Nissen-Wade, and Jennie Fraine. The poems were written over a month, and all to do with some aspect of or relationship to the Moon. As they move through the lunar month, their thoughts, inspirations, and responses move with them. Patrice was travelling for part of the month, Nissen-Wade, and Fraine moored in Australia. More
Once upon a time there were three women, who, inspired by a fourth, set out on a month-long journey. They travelled from New Moon to Full and back to Dark Moon again, charting all the aspects and phases of their relationships with Luna, Her Goddesses, Her moods, and their own. One poet travelled across the Earth, while the two others remained fixed in the terra firma of Australia. They won the treasure of wild inspiration, and yes, at times, struggled with 'what to write', as the month went on, and on, and the Moon just kept rising. Open an eye to the telescope to view Selene, Diana, Artemis, the Rabbit in the Moon, and maybe even the Old Woman In the Moon. Move through the Three Cycles of the Moon, in poetry.

She founded, and for seven years facilitated the very successful WordsFlow writers' group at Pottsville Beach Neighbourhood Centre in far northern NSW, before handing it over to other facilitators who continued it a further three years. In its ten years of operation, a number of members had books published and two began and completed degrees in Professional Writing. Recently she has begun a new writers' group, also at PBNC. This is for women writers, as part of Pottsville Beach Village of Women (VOW). VOW Writers is one way in which VOW seeks to support and empower women survivors of various kinds of trauma, and encourage them to share their talents more widely.

Rosemary has now embraced the online poetry world via blogging, twitter, and international poetry groups and communities. She is a staff member and feature writer at Poets United, an international community of blogging poets, and a sometime participant in other online poetic communities. She administers several poetry and micropoetry groups on facebook, and is a member of others. She is too busy nowadays to chase publication, but when invited (which she is glad still happens now and then) she publishes in both online and paper literary journals and anthologies. Her various blogs, both poetry and prose, can be found on her website at www.nissen-wade.com or by googling Rosemary Nissen-Wade. (The hyphenated surname ensures she's the only one!)

Some free pdf chapbooks are available at her Google site: https://sites.google.com/site/rosemaryschapbooks/

Her work has also appeared in the collaboration, SHE TOO (with Helen Patrice, Delaina J. Miller and Leigh D.C. Spencer) in the chapbooks LIFE AFTER DEATH and THE IMAGINED OTHER (the latter in collaboration with Walt Wojtanik, Phillip Barker and Bruce Neidt) and in a wide variety of journals and anthologies. Her website has details of her non-Smashwords publications and how to acquire them. Most are also on her Amazon page (see 'Where to buy in print').

Forthcoming at Smashwords is FOUND ON THE EDGE, a new collaboration with Helen Patrice, Jennie Fraine and Michele Brenton, planned for early 2020. Watch this space!

You have subscribed to alerts for Rosemary Nissen-Wade.