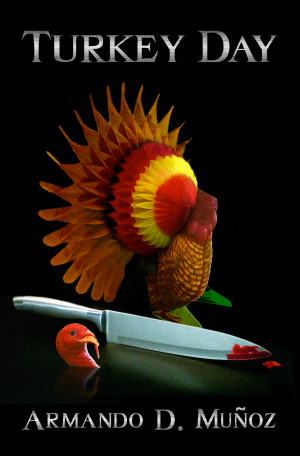 Author Clive Barker on Hoarder and Turkey Day by Armando D. Muñoz - "Your prose is beautifully crafted. You have an instinctive understanding of the complex challenges of horror story-telling. Consider me a new fan."

Along with being a horror novelist, Armando D. Muñoz writes and directs horror films, including Mime After Midnight, Pervula and Panty Kill, creates bloody special FX, and performs as horror DJ Pervula. His first novel Hoarder was called “dynamite – a sickening, imaginative shocker” in the pages of Fangoria Magazine.

He is currently cooking up a follow-up to Turkey Day titled Turkey Kitchen.

Review
DoctorBuckles reviewed on Jan. 11, 2017
(no rating)
I was so excited when Turkey Day was released from its oven to run amok through the minds of horror enthusiasts. Armando Munoz has captured a moment in time in fun-tastic horror-ific detail. Timely, Munoz gives a moment pressed adjacent to our current socieo-political nightmare with a similar vigor to the novels of Margaret Atwood. Rife with sociological issues right from the heart of Middle America, this novel turns over a heaping slasher payload that infiltrated my dreams. I enjoyed the fact the novel is a classic horror genre, but also punches into what may actually be unfolding out along the blue highways of our country. No one knows that better than Munoz, drawing on his first-hand disquieting life experiences, Munoz is a master of suspense that held me at bay with little chops and stabs. I craved bloody body-part gravy by the time the giblets fell and my associations with Thanksgiving have been marred forever. Clever, thoughtful and unique are the words that make this horror shocker fresh. Plus, a who-done-it (who’s-doing-it)! I enjoyed this read – twice!

Sometimes you have to put cheese on the broccoli to get the kids to eat it. And sometimes a clever writer uses a horror story as the wooden stake by which he impales the far more demented (and real) horror of homophobia. Armando Munoz’s follow-up to “Hoarder” is such a novel. It is a bloody (and bloody good) suspenseful whodunit destined to keep you guessing and will – I assure you – surprise you when finally the killer’s identity is revealed. Along the way, however, you’ll need to endure the Thanksgiving from hell. When two female lovers attempt to break bread with the family of one of them, the pair come face to face with a most virulent strain of self-righteous, rube-soaked, Bible-banging hate that not only reviles but seeks to destroy everything the two young women represent. Sensing right off that their presence and gay lifestyle is – to put it mildly – “most unwelcome,” the two commence to fighting a two-front battle, the vile poison that is the backward-thinking religiosity of their hosts and – in keeping with the genre – a killer upping the body count by the minute. Who will survive? Will they survive? You’ll have to read to find out, but along the way, this meticulously-crafted horror story will seduce you into – gasp! – actually learning and empathizing.

You have subscribed to alerts for Armando D. Mu&ntilde;oz.

You have been added to Armando D. Mu&ntilde;oz's favorite list.

You can also sign-up to receive email notifications whenever Armando D. Mu&ntilde;oz releases a new book.