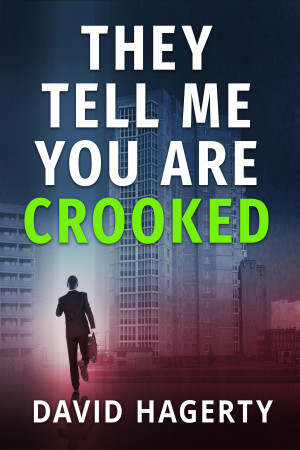 They Tell Me You Are Crooked

By David Hagerty
Two years after the murder of Governor Duncan Cochrane's daughter, new threats emerge: a sniper in Chicago's most notorious housing project, and a blackmailer who plans to reveal his ruinous family secret. Fearful of exposure and desperate to save other people's children from the same fate as his own, he moves into the tenements and begins parallel manhunts for both enemies. More
Two years after the murder of his daughter, Governor Duncan Cochrane must hunt down a sniper and a blackmailer.
~~~
Terez Lyle says: "Another fast-paced, can’t-put-down book by David Hagerty. Like his first book, he keeps you guessing what will happen and then bring you an unexpected “I didn’t see that coming” ending. This book is another winner!"
~~~
Two years have passed since the murder of Duncan Cochrane’s daughter. As governor, he now holds the power to punish all criminals, yet he cannot prosecute her killer without destroying his political career.

To protect his own family and those he governs, he moves into the tenements and begins parallel manhunts for both enemies. Along the way, he faces menacing gangs, a mysterious layman, indifferent police, and self-serving politicians, all of whom impede his investigations.
~~~
Theresa O'Loughlin says: "From the beautifully written opening chapter describing the sniping murder of a young boy in Cabrini Green, to the protagonist's moving into Cabrini Green in order to investigate the sniping (which is based on real events), to the ultimate satisfying, but not entirely happy, resolution, the writing rings of reality and truth. It draws the reader emotionally forward, and also conveys a terrific sense of time and place."
~~~
EVOLVED PUBLISHING PRESENTS the second book in the series detailing Duncan Cochrane’s rise to prominence and the personal cost of his public ambitions. [DRM-Free]
~~~
THE "DUNCAN COCHRANE" SERIES BY DAVID HAGERTY:
Book 1: "They Tell Me You Are Wicked"
Book 2: "They Tell Me You Are Crooked"
Book 3: "They Tell Me You Are Brutal"
Book 4: "They Tell Me You Are Cunning"
~~~
MORE GREAT CRIME THRILLERS FROM EVOLVED PUBLISHING:
"The Oz Files" Series by Barry Metcalf
"A Point Thriller" Series by Jeff Altabef
"Forgive Me, Alex" by Lane Diamond
"The Syndicate-Born Trilogy" Series by K.M. Hodge

Stories about crimes have always resonated with me, whether it was "Crime and Punishment" or "The Quiet American." Maybe it’s because I started my career as a police reporter, or because I worked for a time as a teacher in the county jail.

More than a decade ago, when I decided to finally get serious about writing, I started with short stories based on real misdeeds I’d witnessed. I wrote one about my next door neighbor, who’d been murdered by a friend, another about an ambitious bike racer who decides to take out the competition, and a bunch of others based on characters I met in jail.

Over time these got picked up by various magazines online and in print. More than a dozen now exist, with most of the latest in Alfred Hitchcock’s Mystery Magazine and Big Pulp.

For my debut novel, "They Tell Me You Are Wicked," I drew inspiration from the most infamous event in the history of my hometown: the real life killing of a political candidate’s daughter (though I made up all the details). Now I am at work on a second volume in the series, set two years later, after my hero, Duncan Cochrane, has become governor. He’s haunted by the family secret that got him elected, and fighting a sniper who’s targeting children in Chicago.

About the Series: Duncan Cochrane

Murder, mystery, and intrigue from the seedy underbelly of Chicago politics.

You have subscribed to alerts for David Hagerty.

You have been added to David Hagerty's favorite list.

You can also sign-up to receive email notifications whenever David Hagerty releases a new book.