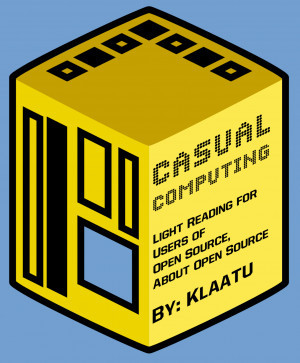 By Klaatu
Rated 5.00/5 based on 1 reviews
A book about open source culture, open source ideology, and open source software, written by open source and open culture enthusiast and podcaster Klaatu (of Hacker Public Radio and GNU World Order). Read it when you want to relax, but still obsess over tech. More
Books about technology are usually appropriately terse: they cover a topic so that you can understand it, with the goal to get you to stop reading quickly and start using the technology.

This isn't that kind of technology book.

Klaatu is a POSIX geek and an open source enthusiast. He has worked in the film industry and the IT industry, and in both of those combined. He podcasts for Hacker Public Radio and GNU World Order, he maintains several SlackBuild.org packages, and helps maintain the Slackermedia information site.

And yes, he's an Emacs user.

I remember when Klaatu first started appearing in forums and in IRC chans over a decade ago, asking all myriad of questions, like a journalist would, but deeper than that, possessing an obvious intent on really getting into this thing that had gripped his inquisitive and enthusiastic nature.

Now a respected member of not just the Slackware, but the more encompassing and general in nature Linux community at large; moreover, an acknowledged advocate and ambassador of the FOSS community, he descends into the depths of Open Source, Slackware, Linux culture, RPM hell, and other topics with the sort of wreckless abandon in this book that yields a work quite deserving of praise in the world of geekdom.

For anyone with an opinion, or philosophy, and sufficient historical background and insight into the vitriolic back channels and warring factions against the Borg Collective, Klaatu deftly pens out a history that is personal, reflective, and completely able to be identified with by anyone who has been there.

One of my favorite parts of the book, as a professional who has been a stalwart user and supporter of Slackware Linux since 1993, is Klaatu's musings on his discovery of Mandrake Linux. It was fun to see him, admittedly, miss the mark a bit, as to how the demise of what was a very special distro came to be, and in those passages exposing much of the history of Linux too as something that is shrouded in deft mystical recollections by some, but not all, of the participants that have come and gone over the years.

Hint: Mandrake Linux made the mistake of going public just prior to the implosion of the .com bubble ;)

I was very sad when Mandrake met its demise at a time when recent IPO's were failing all around, much of the resulting frenzy feeding upon the exposure of a trend almost criminal by startups to go public and take advantage of the culture that investment banking had created, foreshadowing the banking and real estate bubble that popped in 2007 triggering a great recession - Mandrake was not one of those startups without intrinsic value, and were it not for the timing of that IPO, I believe it would have gone on to much greater things.

If nothing else, Mandrake was a refeshing break, as an exellent desktop distro, that was so sorely lacking in the days of Redhat Linux 4 and 5, long before there was an RHEL (but Redhat did support installations in the Redneck language).

Having worked on Mageia myself to help bootstrap that community effort until the Beta 1 launch a few years back, I too share much of Klaatu's warm sentiments for both of those distros, and as such, found this easy read close to the heart, as it is obviously a product of someone who wears his geekdom on his sleeve as a person who is a perfect example of what happens when you don't bother to care if you're getting back more than what you give - because it's the giving that is the kewl part, the rest is just virtual beer.

Make no mistake, this is editorial, commentary, one man's observations and deductions, with plenty of anecdotal hypotheses and suppositions - it is NOT a HowTo, or a Tutorial in the general sense, although it does contain many nuggets of useful kitchen ideas for cooking with Linux, GNU, and Open Source Software.

I do think that Klaatu might be a bit optimistic about the Borg, and their designs upon the Open Source Community, lest we forget the 3 E's of the Halloween papers, first leaked to Eric S. Raymond in 1998; although just as in the TNG series we have demonstrated that resistance is indeed NOT futile.

I highly recommend this as a great casual bedtime read of fun and insight into both the culture, and the evolution in freedom that many take for granted when those little palm-sized gadgets make 'pew pew laserblast' sounds in our pockets.

You have subscribed to alerts for Klaatu.

You can also sign-up to receive email notifications whenever Klaatu releases a new book.