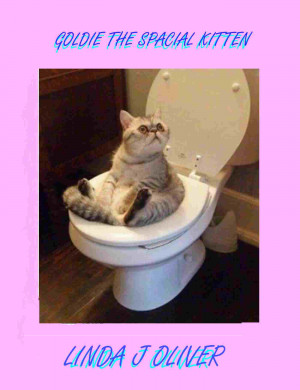 By Linda J Oliver
The cutiest kitten grew up with quite a surprised that no one would believe was possilbe it came back to her home. More
Goldie The Special Kitten
It was on my mind that it was so cute of this little kitten to look up at me with her big brown eyes looking so innocently at me. I've wanted it so badly I wasn't real sure when mother did not want me to have her, But then she changed her mind and one day. She came and said let's go to the pet shop and get you a kitten.
Oh no! A kitten! I've been wanting one for the longest. Now you said let's go to the shop and get a kitten. I thought maybe dad was a allergic to animals. How come you said we can get one now. I don't understand your mother.
The thought of having a kitten was so exciting to me! I decided I could hardly stand and wait until my father came home so he could tell me himself. I'am going to be so happy when he smile and the words "Yes you can have your pet!
When he finally came home. It was after supper when she finally decided to tell me he was not allergic to the kitten So I could have my it after all. he said that he went to the pet shop and nothing happened to him so it was fine to have. Goldie is everything she thought she would be and now she"s going to be the happy from now on.
Available ebook formats: epub mobi pdf lrf pdb txt html
First 15% Sample: epub mobi (Kindle) lrf more Online Reader
pdb
Price: $7.99 USD
Buy Add to Library Give as a Gift
How gifting works
Create Widget
Tags: humor cat kitten cat and animal lovers humor about family kitten adventure humor about cats
About Linda J Oliver

This is a story is about a roach that was born to roam From the time he woke up he was ready to go somewhere, He did not know how or when or where he was going but knew he was going to get out more. His mother said it was time for us to go out to see what he could get into because he was so hyper and excited. His mother said, I don't know what I'm going to do with him. She though maybe he could play in his room. That should keep him occupied for a while. No way because he wanted to go outside and play.

He was able now to go around in the house and do different things each day and so that made him a little happier. His mother knew it was time for him to get into something more.

We know now that Chuckie was getting older and he wanted to go out and is see the world and that's what we will do together. They would go somewhere far away--- from anywhere that he was't used to--- So maybe he would get a scared of the proposition of it all, she thought to herself.

Reviews of Goldie The Special Kitten by Linda J Oliver

You have subscribed to alerts for Linda J Oliver.

You have been added to Linda J Oliver's favorite list.

You can also sign-up to receive email notifications whenever Linda J Oliver releases a new book.