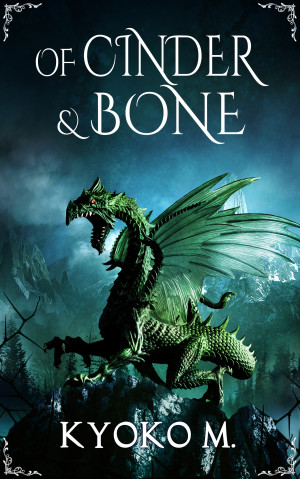 Of Cinder and Bone

Two MIT scientists create a dragon and the yakuza steal it so they can clone more. More
After centuries of being the most dangerous predators on the planet, dragons were hunted to extinction. That is, until Dr. Rhett “Jack” Jackson and Dr. Kamala Anjali cracked the code to bring them back. Through their research at MIT, they resurrected the first dragon anyone has seen alive since the 15th century. There’s just one problem.

Kyoko M is a USA Today bestselling author and a fangirl. She is the author of The Black Parade urban fantasy series and the Of Cinder and Bone science-fiction series. The Black Parade has been reviewed by Publishers Weekly and New York Times bestselling author Ilona Andrews. Of Cinder and Bone placed in the Top 30 Books in Hugh Howey's 2021 Self Published Science Fiction Contest. Kyoko M has appeared as a guest and panelist at such conventions as Geek Girl Con, DragonCon, Blacktasticon, Momocon, and Multiverse Con. She is also a contributor to Marvel Comics' Black Panther: Tales of Wakanda (2021) anthology. She has a Bachelor of Arts in English Lit degree from the University of Georgia, which gave her every valid excuse to devour book after book with a concentration in Greek mythology and Christian mythology. When not working feverishly on a manuscript (or two), she can be found buried under her Dashboard on Tumblr, or chatting with fellow nerds on Twitter. Like any author, she wants nothing more than to contribute something great to the best profession in the world, no matter how small.

About the Series: Of Cinder and Bone

The chronicles of Dr. Rhett "Jack" Jackson and Dr. Kamala Anjali: two MIT scientists who clone the first dragon ever seen alive since centuries ago when the creatures were wiped out of existence by dragon hunters. All scientific breakthroughs come with a price, and cloning their dragon takes its toll on their lives.

Also in Series: Of Cinder and Bone

Reviews of Of Cinder and Bone by Kyoko M

You have subscribed to alerts for Kyoko M.

You have been added to Kyoko M's favorite list.

You can also sign-up to receive email notifications whenever Kyoko M releases a new book.