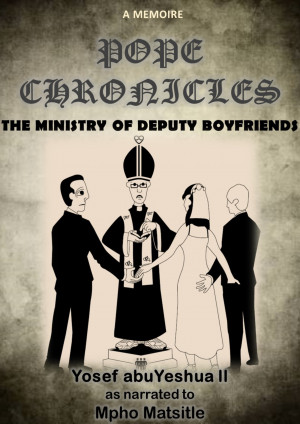 By Mpho Matsitle
A quirky and irreverent fictional memoire of Pope Emeritus of the Holy Alliance of Deputy Boyfriends, and an exploration and exaltation of his ministry. A tongue in cheek self-help manual to unburden men from the fear of being cuckolded through misappropriation of religious and political jargon and theories to tackles issues faced by the modern man in his amorous relationships. More
The one thing that men fear the most, after their wives and mothers that is, is being cuckolded. This fictional memoire is a tongue in cheek self-help manual to unburden men of this fear. Misappropriating religious and political jargon and theories, the memoire tackles issues that the modern men is faced with in his amorous relations with the opposite sex. In the main, the memoire highlights the role played by deputy boyfriends in assisting men in relating with their lovers. Its premise is that due to a host of factors, patriarchy chief among them, the majority of men are handicapped in loving a woman. Thus creating a vacuum – and as the Commander in Chief Julius Malema is wont to say; nature doesn’t allow a vacuum.

The memoire is written from the perspective of Yosef abuYeshua II, former pontiff of the Holy Alliance of Deputy Boyfriends and leader in the ministry of deputising. He explores the major moments of the ministry during his papacy, utilising the official statements from the papal office with explanatory commentary. This to bring to light the work of the Alliance and its position on the contentious issues of the day. It is the ultimate appraisal of all the deputy boyfriends, from the original deputy boyfriend Joseph who deputised God to South Africa’s very own Dali Mpofu who deputised for Tata Nelson Mandela.
Download: epub mobi (Kindle) pdf Online Reader
Price: Free! USD
Add to Library
Create Widget
Tags: love relationships polyamory patriarchy feminisim
About Mpho Matsitle

Mpho Matsitle writes and thinks in music – the only language he understands – and believes that everything must be subjected to the unforgiving scrutiny of black radical thought. He fancies himself an immortal black existentialist and a libertine. He claims he’s just a collection of ideas and passions – all mind and soul – and thus does not recognise his body nor take any responsibility for the actions thereof. Which would explain his devotion to thought and art, and somewhat neglected (shabby?) appearance.

Born and bred in Kanana, the mining township of Orkney in the little dorpie Klerksdorp, raised in a wonderful church by a loving family, a graduate of the University of the Free State and now by default a denizen of Bloemfontein where he works and wards off philistinism with his magic provocations.

He’s a leader of several special concern movements (that exist mainly in his head) including but not limited to the men’s rights tripartite: the Holy Alliance of Deputy Boyfriends, the National Association of Husbands And Boyfriends (NAHAB) and the National Union of Ben10s of South Africa (NUBSA).

Lover to all, friend to few, intellectual leader to some, comrade to many. A reader, Facebook griot, patron of the arts, lifestyle fraudster, coffee connoisseur, and Jazz junkie.

Writing is something that happened to him. First and foremost it makes him happy. Secondly and equally important it amuses him. He also happens to believe that he’s pretty good at it – and this also warms him up inside; which is always a good reason to do something.

Currently working on a series of provocations called “State of Mangaung Arts” and sitting on a manuscript for a novella, “Kleva Tsa Westdene” (it's too good! He'd feel like a fraud claiming he wrote it) – a reprise to his intellectual leader's “Fools Of Melville”.

Reviews of Pope Chronicles: The Ministry of Deputy Boyfriends by Mpho Matsitle

You have subscribed to alerts for Mpho Matsitle.

You have been added to Mpho Matsitle's favorite list.

You can also sign-up to receive email notifications whenever Mpho Matsitle releases a new book.