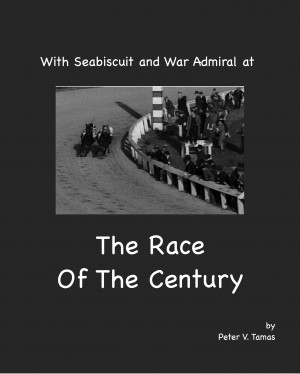 With Seabiscuit and War Admiral At The Race Of The Century

By Peter Tamas
Man o' War was the greatest racehorse of the 20th Century. But he never had a great opponent. In the end, the Race of the Century was between the son and grandson of Man o' War. They ran right next to each other the entire race. The horses were so close to each other that the jockey’s knees almost touched. This book is about that race. More
Seabiscuit and War Admiral were the son and grandson of the greatest racehorse. They raced against each other once. That was the race of the century.
George Woolf arrived at the last possible moment. He strutted into the paddock and swung easily into Seabiscuit’s saddle. George smiled and said hello to everyone cheerfully, as if he were the only one completely unconcerned about the race.
War Admiral walked onto the track first, head up. Seabiscuit followed, head down. Like George, Seabiscuit looked unconcerned. George could feel Seabiscuit’s tight muscles. They reminded George of a coiled spring. Seabiscuit brought his head up once and looked about the crowd.
Farrell Jones stood near some people who worked for War Admiral's owner. They were sure War Admiral would win and joked about Seabiscuit. As the start of the race got closer, they did not say much. They all knew this would be a great race. The crowd was packed too tight for the announcer. In the end, he found a spot near the end of the stretch, where the horses would go into the first turn. He climbed up on the outer rail and looked to his left at the start. He started his broadcast. “Ladies and Gentlemen I found it impossible to get through this enormous throng at Pimlico today… the first time I failed to do that from the paddock.”
The flagman held up his arms. In the Howards’ box, Marcella squeezed her eyes shut just before the start. The two horses reached the line together and stood still. All was quiet. The starter’s bell broke the silence. War Admiral raised his front legs. George Woolf felt Seabiscuit’s muscles tighten and push downward. To help with what little momentum he could, George threw himself forward, his legs straight back. George smacked Seabiscuit once to let him know it was for real. George could feel hard muscles everywhere he touched the horse.
Marcella heard the starting bell. She opened her eyes. The two horses stretched their legs as hard as they could, side-by-side, building speed. People all about Farrell Jones were shouting. The fans were as full of energy as the horses. Marcella could see excited people in the infield ran towards the backstretch to get a better view.
War Admiral also drove forward as fast as he could go. The two horses ran next to each other for thirty yards. George kept Seabiscuit close, so Seabiscuit could look War Admiral in the eye.
Marcella could see that one of the horses was pulling ahead a little at a time, first by a nose, and then inching forward. Someone near Marcella gasped. Red leaned towards the radio, concentrating on the announcer’s voice. “Seabiscuit is outrunning him!”
Marcella could see the people in the infield pushing over the fence that was supposed to hold them back from the track.
After only a sixteenth of a mile, Seabiscuit was half a length ahead. George Woolf could feel Seabiscuit working hard. Seabiscuit flicked his ears forward. The crowd reached the infield rail. Some arms waved. Others stretched towards the horses. George could see that Seabiscuit’s eyes looked forward, not at his fans.
Farrell Jones knew that War Admiral never had to race as hard as he could. But now Farrell could see War Admiral race like the champion he was. He went to the outside and gained on Seabiscuit.
Red heard on the radio: “They’re halfway down that backstretch and there goes War Admiral after him.”
Around Farrell people shouted “Here he comes! Here he comes!” War Admiral pulled even with Seabiscuit. Farrell could feel the grandstand shaking.
George Woolf loosened the reins slightly. This told Seabiscuit he could start to speed up again. Seabiscuit refused to let War Admiral pass him.
Everyone thought this would be the race of the century. And now halfway through, the son and grandson of the greatest race horse of the twentieth century were running right next to each other. The horses were so close to each other that the jockey’s knees almost touched.
The moment had arrived.

You have subscribed to alerts for Peter Tamas.

You have been added to Peter Tamas's favorite list.

You can also sign-up to receive email notifications whenever Peter Tamas releases a new book.