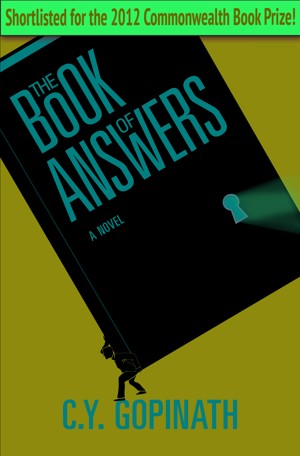 The Book of Answers

Rated 5.00/5 based on 2 reviews
Patros' bland life is shattered when he inherits a book with answers to the world's problems. He sells it off — but it reappears in the hands of a politician and a godman, who pass draconian laws citing the book as their divine source. As his country plunges into chaos, Patros emerges as a reluctant hero. A sharp satire about how the corrupt the powerful can manipulate an unreflective society. More
Shortlisted for the 2012 Commonwealth Book Prize!

There’s nothing more dangerous than a book no one has read.

All that Patros Patranobis wants is to be left alone – to live his ordinary, unremarkable life with Rose, the woman he has not married, and Tippy, the son he has not fathered. But one day, he receives a mysterious, metal-bound book, a bequest from a long-dead ancestor. In its pages, he is told, are answers to all the world’s problems. There’s only one hitch: The Book of Answers is locked. Its key is hidden somewhere in Kerala.

But Patros doesn’t really want to make the world a better place. Eager to be rid of this burdensome book, he sells it to a junk shop. And that is when the madness begins. Within months, The Book of Answers reappears in the hands of a godman claiming that through it, God speaks to him. The godman is soon advising the most powerful politician in the land, the ruthless Ishwar Prasad. Citing The Book of Answers as the divine source, Ishwar Prasad unleashes a slew of Orwellian laws.

The India 50-50 Law proposes dividing the country into two, with rich states in one cluster and poor in the other.

The Happiness Tax imposes a levy on sexual intercourse, replete with amnesty schemes for voluntary disclosure, and tax havens where you can have sex for nothing.

The FYI Act legalizes cheating in examinations making it mandatory for answers to exam questions to be made available all over the campus.

Trivial Courts are set up all over the land, where anyone may accuse anyone else of anything, and be judged and sentenced by anyone with a little free time that morning. Soon the country is squabbling.

A Grey Area is set up to quarantine people who think too much.

A Ministry of Errors and Regrets is formed, to apologize in public each time the government announces yet another atrocious measure.

Pushed by his friends and Rose, Patros tries to undo the harm he has unleashed by his sale of the book but only gets embroiled deeper in intrigue and politics. In the process, he becomes a reluctant hero to an embattled and confused nation. Finally, he is left with no option but to make the journey to Kerala in search of the key. But nothing could have prepared him for what he finds there.
Available ebook formats: epub mobi pdf rtf lrf pdb txt html
First 25% Sample: epub mobi (Kindle) lrf more Online Reader
pdb
Price: $9.99 USD
Buy Add to Library Give as a Gift
How gifting works
Create Widget
Tags: politics corruption satire india orwell politics noir politics and faith right wing prizewinner prizewinning shortlisted politics presidency executive power constitution misgovernance religion in politics commonwealth book prize
About C Y Gopinath

My first novel, The Book of Answers, is shortlisted for the 2012 Commonwealth Book Prize.

I have been a writer as far as I can remember, and began writing fiction in 2005. I also make movies, direct theatre, compose, cook and travel.

I can't wait to get up in the morning.

Reviews of The Book of Answers by C Y Gopinath

As soon as I had read the blurb of this book, my interest had been piqued. “The Book of Answers” is the story of Patros Patranobis. He inherits a book that supposedly has the answers to all the problems plaguing the world. Not wanting to add more problems to his already problematic life Patros disposes of the book but is shocked to see it again on National Television under the control of India’s most powerful (and corrupt) political leader. The rest of the story follows Patros and his (mis)adventures as he tries to grapple with unwanted heroism thrust on him, and the repercussions of him becoming the forced leader of a political movement.

The story is gripping and you keep turning the pages to know what happened next. There are rarely any places where the pace of the story slackens and that is saying something for a 350+ pages long book. The flow of the book was mostly linear, and there was no problem following the story anywhere. I especially loved the names of the characters. The protagonist is Patros Patranobis, his son is Tipperary (Tippy), the ‘ruler’ of the country is aptly named Ishwar Prasad, and once you hear the name Shinde – you know it is going to be a cop. Apart from the names, almost all the characters have been given quite a bit of personality. All the major characters have an interesting back-story which helps in understanding nuances of that person’s characterization.

In summary, I would say this is one of the better books I’ve read this year and I completely enjoyed the read.

I had the pleasure of reading an early review copy of C.Y. Gopinath's debut novel. *The Book of Answers* promises even greater success than his globetrotting chronicle *Travels with the Fish( (HarperCollins India, 1999). Released just this month, also by HarperCollins India, *The Book of Answers* has already appeared on the bestseller list in that country.

I’m going to don my “let’s pitch this book to a modern market” hat, something I find hard to do with my own books and hesitate to do with Gopinath’s debut novel for fear of doing it an injustice. Anyway, here goes:

Think, an Indian Jonathan Swift turns to magical realism with a message for readers everywhere.

Alternatively, we could describe the novel as a fabulist satire wherein a Clarke Kent hero represents the potential of Everyman to take a stand and fight against those absurd and often evil (often bureaucratic) forces that shape our lives. Readers in Thailand might almost believe that former and newly de facto PM Thaksin Shinawatra had seen the book in manuscript and used it as a manual for retaking power.

The book is compulsively readable. I found myself reluctant to skim passages for fear of missing any of the gems scattered across every page. Gopinath sketches his hugely entertaining characters with sure and economical strokes. I enjoyed all of them, from the Convener and the godman to B Plus and the “doctor of venereal diseases,” with his very entertaining medical examination of Pat and Rose, the central characters. The author’s treatment of Indian English, meanwhile, is both warmly funny and minimalist, in no way obtrusive. In the course of one entertaining dialogue, for example, “codswallop” devolves by stages into “shit,” the speaker’s Anglophiliac try for elegance nicely derailed. “More banging for a buck,” in another conversation, is enough to comically conjure, without further ado, the voice Gopinath wanted. “Gourment” (see the extract, below) is how Indian bureaucrats pronounce “government,” and it includes connotations sorely missing in the conventional expression.

The book is also a structural success. Among other features, it presents an excellent conclusion, something too many otherwise good novels lack. En route, Gopinath consistently leaves the reader hanging at the end of each chapter, wanting more, and introduces each successive chapter with a surprise.

In the first chapter, the hero’s proto-obsessive compulsive negotiation of Mumbai's streets and his collision with the Fat Man is superbly realized. And what an idea is introduced shortly thereafter! A blind calligrapher of unknown provenance has inscribed wisdom for times not yet here in a mysterious tome known as The Book of Answers, recording details of the future produced by that calligrapher's lover, chief cook for a client's household. That’s followed hard upon by in introduction to “The Ministry of Errors and Regrets.” This venerable institution applies the principle of wringing every possible lesson from a mistake by repeating that error as often as possible. Gopinath adopts a wonderfully comic voice, kind of like Flann O'Brien describing a meeting chaired by the Mad Hatter, the agenda set by Kafka. (The latter individual would have appreciated a ministerial interview to determine whether Pat, the hero, and Rose, his companion, were rich or poor.)

The story as a whole is a delightful tapestry woven from such threads as the eponymous Book of Answers itself; the Ministry for Errors and Regrets; Rose's scrapbook of omens; the dynamic between Pat, his friend Arindam, and Rose, who turns out to be Arindam's wife; Pat's comic love-life with Rose; and the rather moving development of Pat's relationship with his son Tippy, as Tippy himself is gradually revealed as much more than the klutz we first meet, the lad with “content-free eyes” tipped back in a chair chewing gum.
Here’s just a taste from the hilariously barbed banquet:

“We live in times of world ending. Kali yug, as we say in the scriptures. The Convener believes our country is in doldrums. Gourment is committed but man can only do so much. Shri Ishwar Prasad is facing challenges of lifetime, struggling with national problems such as upcoming elections, crime, literacy, terrorism, democracy, women's liberation, abortion, sexual slavery, judicial backlog, and a bankrupt treasury. While he is doing all this —”

“We are not fooled,” said Rose. “Your boss heads a government in charge of pulling wool over people's eyes. The reality is that it’s a government of lies.” Her eyes blazed at the Convener’s Personal Assistant.

“You make a good point,” Janki Ram continued reasonably. “But concept of pulling wool is rooted in Hindu philosophy and spirituality. Shri Ishwar Prasad says reality is overrated. It's a nice idea, of course, but it doesn't exist. The Convener’s only wants to make this acceptable to our struggling millions. He is not sidetracked by the facts. He is concerned with the truth.”

Such ideas, expressed differently, figure prominently in another book I've just read. Empire of Illusion: The End of Literacy and the Triumph of Spectacle, by Chris Hedges, is a bleak jeremiad that appears to leave little option other than fleeing the planet. I prefer the darkly comic recourse offered by The Book of Answers.

You have subscribed to alerts for C Y Gopinath.

You have been added to C Y Gopinath's favorite list.

You can also sign-up to receive email notifications whenever C Y Gopinath releases a new book.