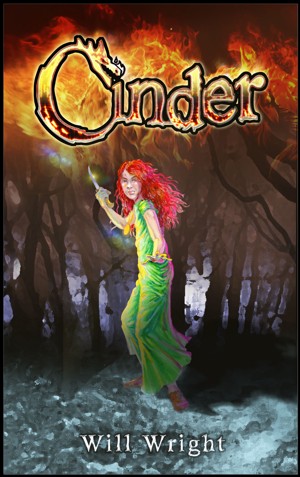 By Will Wright
Rated 4.83/5 based on 6 reviews
Cinder despises humans. That’s not uncommon among dragons.

But someone is killing the dragons. Why? How? Cinder doesn’t know, and she saw her parents slain.

Now Cinder, the wizard Tig, his apprentice Alex, along with willing and unwilling allies, must find a way
to save dragon-kind.

And Cinder has to become a human girl to do it.

If you are looking for an exciting fantasy story of wizards, dragons and magic, this book will not disappoint!
There is action, romance, magic and legends that bind together a fascinating cast of diverse characters. Great to see young learning from elders, men and women fighting side by side, humans, wizards, animals & dragons working together for a common cause. Even the endearing pets are chivalrous and there is also a disabled dragon who helps to save the future of her kind. I love all the characters and hope Mr. Wright will follow up with individual stories about each of them. I want to know more, especially about the Mad Poet! Looking forward to reading more from this author.

"Cinder," written by uprising author Will Wright, is an epic fantasy filled with dragons, wizards, archers, sailors, cats, dogs, and a few surprises.

The title character, Cinder, is a young dragon who loses her parents to an unknown force. The wizard Tig (short for Tigris), protects Cinder and embarks on a quest to learn what killed her parents. For a disguise, Tig transforms her into a human girl--the girl you see on the book's cover. The result is a fun-filled journey as Cinder learns to cope with humanity while helping to save her fellow dragons.

The book's biggest strength is its vast array of colorful characters. Each member of the cast is distinct and well formed, and each one acts on its own. Half of the characters are human, and the rest are dragons and other magical animals. My favorite happens to be Mank, the cat. You won't find any halflings (that is, elves, dwarves, hobbits, Elvis, or any of those Star Trek aliens that look like humans with fancy makeup thrown on), which some people see as a plus.

The many characters are also the book's main weakness. It takes a while to introduce the cast, which is okay until you realize that some characters cannot be fully explored. There just aren't enough pages to cover everyone. I found myself caring for half of the main characters, while others would meet their demises without a sniffle from me. Same as with the first book in the Harry Potter series, most of "Cinder's" energy is spent in introductions and worldbuilding.

A lot of these concerns could be alleviated with sequels and/or prequels.

The book is well-edited, family-friendly, entertaining, and recommended for anyone who loves epic fantasy.

Finally, a disclaimer: you might find my name in the acknowledgements (included in the free sample). I helped to critique the first draft, but I received no favors to write this review. I'm happy to see he took some of my suggestions, though. :)

I loved Cinder as I said earlier. Very well written & a great story!

(reviewed 58 days after purchase)
christmascarol reviewed on on Sep. 9, 2011

Set in a time when dragons still thrived and magic was alive in the world, Cinder tells the story of a battle to preserve dragon-kind from extinction at the hands of enchanted death speakers. Told from several points of view, Cinder gives the reader the perspectives of a young dragon-turned-human girl, an aging wizard, a middle-aged merchant woman, and an up-and-coming wizard's apprentice-turned-hero. Filled with action, magic, and heart, this is an adventure readers will remember long after finishing the book. The three-dimensional characters and rich plot will keep you engaged from page one on. Best of all, there are plenty of avenues the author might consider for a sequel! Highly recommended.

(reviewed 41 days after purchase)
Stanley McFarland reviewed on on Aug. 18, 2011

Closely related to writer, but still love the book!

An excellent story which got me reading again! Great character development, I found myself really caring about each of them for different reasons. I highly recommend this book, couldn't put it down!

(reviewed 23 days after purchase)
Dra reviewed on on July 21, 2011
(no rating)
Fast pace Dragon fantasy with characters I love, very likable characters with plenty of action...characters growing with the story. My immediate reaction was that it was better than I expected...but I misspoke. There were surprises but Cinder was assume good as I expected. Happily I recommend this delightful Dragon & wizardly tale.

(reviewed 5 days after purchase)
Sophie Rule reviewed on on July 12, 2011
(no rating)
Couldn't take the book down. I really enjoyed reading this book.

You have subscribed to alerts for Will Wright.

You have been added to Will Wright's favorite list.

You can also sign-up to receive email notifications whenever Will Wright releases a new book.