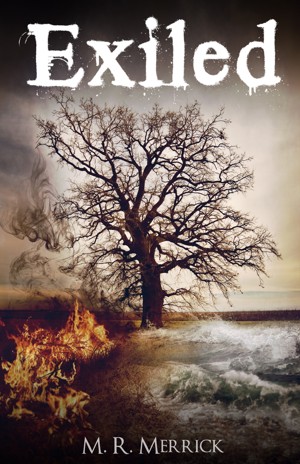 By M.R. Merrick
Rated 5.00/5 based on 5 reviews
Chase was destined to be a demon hunter in the Circle, just like his parents, but failing to develop any elemental magic left him exiled. Alone and trying to survive the demons of the Underworld, Chase finds himself fighting his past, and aligning himself with demons to save his future. More
Chase Williams is a demon hunter in the Circle, or at least he was supposed to be. On his fifteenth birthday, Chase stepped up to the altar to claim his elemental power, but it never came. Elemental magic is passed down to a hunter through the bloodline, but on Chase's birthday, the bloodline stopped.

Exiled without the Circle's protection, Chase has spent two years trying to survive a world riddled with half-demons and magic. When he has a run in with a frightened and seemingly innocent demon, he learns the Circle's agenda has changed: the Circle plans to unlock a portal and unleash pure-blood demons into the world. Vowing to stop them, and knowing he can't do it alone, Chase forms a reluctant alliance with Rayna - a sexy witch with an attitude and a secret. In their attempt to stop them, Chase and Rayna find themselves in the middle of the Circle's plan, leaving one of them to decide what their friendship is worth, and the other's life depending on it.
Available ebook formats: epub mobi pdf lrf pdb txt html
First 15% Sample: epub mobi (Kindle) lrf more Online Reader
pdb
Price: $2.99 USD
Buy Add to Library Give as a Gift
How gifting works
Create Widget
Tags: demon fantasy magic witch hunter elementals fantasy action adventure fiction novel epic saga
About M.R. Merrick

M.R. Merrick is a Canadian writer, author of The Protector Series and The Rise of Genesis. Having never traveled, he adventures to far off lands through his imagination and in between cups of coffee. As a music lover and proud breakfast enthusiast, he’s usually found at the computer between a pair of headphones and in front of a bowl of cereal.

Also in Series: The Protector

Reviews of Exiled (The Protector Book 1) by M.R. Merrick

Loved to read it. Waiting for the next book

I had heard a lot of chatter about this book on Twitter before I finally broke down and bought it. Everything I heard was good, so I figured it would at least be an entertaining read if nothing else. That my dear readers is an understatement. Merrick starts Exiled off with a bang and things don’t slow down much throughout the rest of the book. Not only that, but it’s a great story with spunky characters that have a wealth of personality and new twists on some old paranormal mythology that fit perfectly in the world that Merrick creates. Have I got you convinced? Well then, allow me to continue….

Chase’s story just about broke my heart. His exile was particularly cruel because of how it was dealt, but I’m not going to spoil anything for you. You need to learn to loath the character in question all on your own and trust me, you will. Because of his exile, Chase had to fend for himself, with the support of his mother. It made it harder for him to trust anyone other than her, but it also made him stronger than he would have been if he would have remained sheltered within the Circle. He wasn’t a perfect hero, but he grew during Exile and became a totally different person by the end, which made it possible for the reader to relate to him even more.

Rayna does have secrets, but not many she is purposely keeping from anyone. Most of her secrets she doesn’t even realize. I’m sure that as the series continues we will find out many more. She is nothing like any other person that Chase has ever met and it’s great watching their friendship and trust grow throughout the book. She could easily be a totally broken character for all she’s been through, but Merrick gives her loyalty and strength to overcome all of it. I think it’s safe to say that Rayna may be one of my favorite YA heroines that I’ve read this year.

Merrick also has quite a group of supporting characters that add a lot to the plot of the story and keep it moving. Of course there is Chase’s mother, Tessa; Marcus, another hunter with a mysterious past; Willie (who is probably one of my favorite characters) a demon who can’t catch a break and Vincent, a vampire who is easy to hate. There also others, but besides the ‘bad guys,’ these are the main characters that the story centers around.

Merrick’s descriptions of the worlds he has created make it easy to vividly picture the character’s surroundings. I’m always amazed when an author describes a setting that is not like anything that you’ve ever seen. You know that it doesn’t exist anywhere but in the author’s imagination, yet, as you’re reading you get totally lost in the description and take for granted that it’s reality for now and you don’t question it. That’s magic and Exiled is full of it.

Exiled starts with a bang and ends with one too. The climax is powerful and I’m warning you now, there will be tears. At least there were for me. It doesn’t exactly end in a cliff hanger, but it is obvious that Chase’s story is far from over. After the Epilogue in Exiled (which evoked more tears by the way) I literally can’t wait until Shift, the next book in this continuing series, is released.

Okay readers, I know I gushed. You also know if you’ve read any of my other reviews that I save the gushing for the books that I really, really like and Exiled is obviously one of them. It’s got a little bit of everything for anyone who enjoys YA books. Hopefully my gushing will entice a few of you to give it a try. I, for one and glad I did and sorry I waited so long to read it.

Fast paced, exciting, and imaginative. These are just three of the words that popped into my head as I read this novel. The world that M.R. Merrick paints for his readers is dark and frightening with small rays of light to keep you hopeful for a happy ending. I love books that end leaving you wanting more. The fact that this story is the first in a series is fantastic. I can't wait to see what happens next to Chase and company. I give this novel a big five stars.

"I dodged the razor sharp claws coming towards me and turned to face the demon."

"Keep reading," your mind commands you as you read the first line of this heart-stopping fantasy. AMAZING debut novel. I loved every minute of it.

Merrick's style of writing had me in awe from start to finish. Its smooth. Its refined. Its as if someone with the utmost experience on the subject is telling the story from the depths of the world it exists in. There was never a moment in this book where I had to go back and reread something. Not once. Merrick's words flow into his story THAT well.

The story itself was brilliant, with fresh twists on original myths, unique characters that I fell in love with from the very beginning, and heart-stopping action that never lets up.

Amazing. (Impatiently) waiting for the next one.

You have subscribed to alerts for M.R. Merrick.

You have been added to M.R. Merrick's favorite list.

You can also sign-up to receive email notifications whenever M.R. Merrick releases a new book.