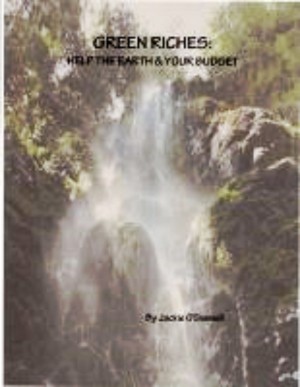 By Jackie O'Donnell
Rated 5.00/5 based on 1 review
Eco-friendly can be eco-nomic. This book offers suggestions that are practical AND save money. It is for people who prefer not to be told what to do but who are problem-solvers, who like efficient, economical solutions that will enhance the lives of their loved ones. It is for concerned people living in a weak economy. It is for all who simply want to do their part to maintain our earthly home.
Download: epub mobi (Kindle) pdf more Online Reader
lrf pdb txt
Price: Free! USD
Add to Library
Create Widget
Tags: earth global warming green problem solving savings solution economic riches planet personal consumer greater good impact
About Jackie O'Donnell

I admit it. I’m addicted to writing. It’s a compulsion I’ve had ever since I first held a pencil and could make words appear on pieces of butcher paper from the roll my parents wrapped bread and other goodies in at our family bakery in San Jose, CA. It continued through third grade, when I won a prize from the school bank for a little masterpiece called “It’s Fun to Save.” It drove away the lonesomes of not being able to play with other kids because polio left me less than agile, and it led to several notebooks containing imaginary escapades of my mom, my dog, my wheelchair, and me. As a senior in high school I won the Creative Writing award for the year—but earned only a B in the class because I wanted to write what I wanted to write, not what was necessarily assigned.

When I began college I decided writing was not going to feed me, and I loved the thought of teaching others how to communicate in writing. Teaching was a natural fit. For many years I taught high school English, that universally hated subject. Those years gave me happy fulfillment and lifelong friends in the form of colleagues and ex-students. I count among my blessings “kids” who are now in education, politics, on both sides of the law (one in prison, one a District Attorney), corporate executives, trades people, the famous and the slightly infamous. Keeping in touch with these people, along with experiences I had growing up as a person with a disability, gave me food for thought. . . and for writing. Much of what I write, then, deals with how people treat each other.

In 2005 my son, Brian, vacated the nest to begin his own life. Deeply saddened by this, his father and I set out the following day to turn his bedroom into a guest room and buy new living room furniture. When Brian asked why we didn’t do all this stuff while he was still home, I could only tell him my hopes that he’d drop by often to see whatever else we were up to. When he’s a parent of a teenager, he’ll understand. Meanwhile, my husband, Frank, and I are content to make a life of our own while enjoying the man our son has grown up to be.

Life is good. Life brings surprises. Life exists to be written about and shared.

Reviews of Green Riches: Help the Earth & Your Budget by Jackie O'Donnell

I like the approach in this book. It talks to me the way I think and gives ideas I can do. I was surprised at how much money I could save and still tell my eco-friends that I'm doing my part to help the environment.

(reviewed the day of purchase)
Riley O'Casey reviewed on Dec. 26, 2009
(no rating)
The most readable of the Be-Earth-Friendly books I've seen. Proves I can afford to be more "green" and not disrupt my life. Nice casual writing style with some humor. Practical and organized into problem areas rather than dry lists. Great price, too, especially for what you get!

You have subscribed to alerts for Jackie O&#039;Donnell.

You have been added to Jackie O&#039;Donnell's favorite list.

You can also sign-up to receive email notifications whenever Jackie O&#039;Donnell releases a new book.