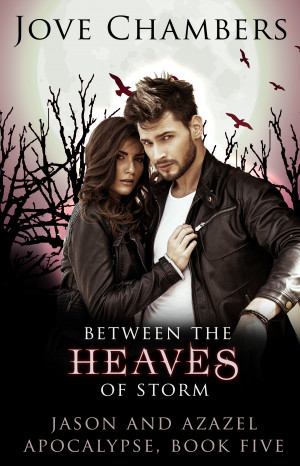 Between the Heaves of Storm

By Jove Chambers
Rated 5.00/5 based on 2 reviews
Azazel has amnesia.

Kieran has Azazel's memories and powers.

Jason can manipulate Azazel's mind now, and as far as he's concerned, she's not leaving him. No matter what he has to do to keep her. More
Azazel wanders into Jason's community with no memory of who she is or what they shared together. But Jason recognizes her, and once he discovers his powers work on her, he's willing to do anything to keep her with him, no matter how macabre or immoral.

Kieran wanted to purge Azazel's powers with the grimoire, but instead he's transferred them to himself, along with her memories. When he discovers the Order of the Fly want to use him and the powers to take over the world, he sets off to find Azazel, determined to return her powers and memories so that she can stop the OF.
Available ebook formats: epub mobi pdf rtf lrf pdb txt html
First 10% Sample: epub mobi (Kindle) lrf more Online Reader
pdb
Price: $3.99 USD
Buy Add to Library Give as a Gift
How gifting works
Create Widget
Tags: romantic suspense occult post apocalyptic romance thriller apocalyptic fiction v j chambers jason and azazel
About Jove Chambers

Jove Chambers is the dark romance pen name for USA Today bestselling author, V. J. Chambers. Most of her books were originally published under that name.

Also in Series: Jason and Azazel

Reviews of Between the Heaves of Storm by Jove Chambers

great book! i loved the first jason and azazel trilogy and this one is just as good.

Between the Heaves of Storm was so incredibly engaging. It will grab you and keep you until the very last word. I can't say enough about this story. It's absolutely flawless. I can't wait until the next book!

In this book, Azazel has lost her memory and her powers. She has no idea who she is only that she feels drawn to Jason and sets out to find him and join his community. She does not remember him, but it is clear to her that he knows who she is. Things get hot and heavy between them and Jason is becoming more and more violent and crazy, if that is even possible. Kieran has Azazel's powers and her memories and sets off with Jason's son, Chance, to find her. In this story, we finally see a change in Jason, he realizes he needs to change and wants Azazel to want him without the mind control and with her memories fully intact. Kieran, who I did like before mainly because I felt sorry for the guy, goes through some interesting changes. There is a cliffhanger at the end that will leave you dying for the next book.

You have subscribed to Smashwords Alerts new release notifications for Jove Chambers.

You have been added to Jove Chambers's favorite list.

You can also sign-up to receive email notifications whenever Jove Chambers releases a new book.